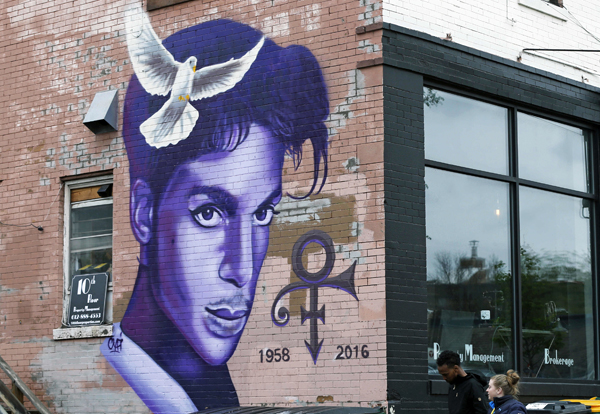 A mural honoring the late rock star Prince adorns a building in the Uptown area of Minneapolis. Since Prince died, fans have been finding their own ways to remember the musician. [AP/NEWSIS]

LOS ANGELES - Before his death, fans searching online for Prince were likely to find just a handful of his performance videos and almost none of his recorded music. In the days since he died, YouTube and other uploading sites have been flooded with hundreds of hours of the superstar musician’s songs, concert footage, TV appearances and music videos.

It’s a boon for Prince lovers, and a sign that the notoriously tight copyright controls the artist maintained over his material are rapidly loosening. It’s also building hope for hardcore fans that they might someday hear the Holy Grail of Prince’s music: unreleased recordings from the vault at Paisley Park, his famous recording studio complex in suburban Minneapolis.

“There could be hundreds of songs we haven’t heard, and I’m told they’re from all sorts of eras,” said author and journalist Toure, who cited estimates from bandmates that Prince recorded a song a day on average during an “extraordinarily prolific” stretch in the 1980s. The finished “Purple Rain” had nine tracks, but there were reports that Prince and the Revolution recorded as many as 200 songs during that album’s sessions, he said.

Devoted fans will be eager for the emergence of unreleased album sessions like “Camille,” “Dream Factory” and “Roadhouse Garden” - fabled projects that saw some tracks reworked for release and others locked away. Those who were awed by Prince’s fierce live shows - and legendary after-show shows - will want concert recordings. Then there are the collaborative sessions he did with artists like Miles Davis, not to mention the songs he channeled to other musicians like the Bangles, The Time and Mavis Staples.

“If anyone could have a great album in the vault, or several great songs, it could be him,” said Toure, who interviewed Prince and wrote the 2013 book “I Would Die 4 U: Why Prince Became an Icon.” But he added the cautious reminder that even music icons like John Lennon, Michael Jackson, Jimi Hendrix and Kurt Cobain produced few posthumous gems even though all died while still actively recording.

Music writer Stephen Thomas Erlewine suggested Prince’s after-death output may be comparable to the surge of material Bob Dylan has been releasing regularly since 1991 on his “Bootleg Series” - 12 volumes (so far) of demos, rare tracks, alternate takes and concerts.

“I think there will be re-workings of familiar songs that will put Prince’s released albums in context, and there will be songs that will be a complete surprise,” said the senior pop editor at Rovi, who said he’s hoping for a live album. “We really don’t have any live recordings of Prince at his peak.”

On the forums at the fan website prince.org, devotees mourned Prince and debated which recordings they were eager to someday hear.

“They need to take their time with this,” wrote a member with the nickname PURPLEIZED3121, who hoped that former members of the Revolution and Prince’s other bands would be involved. “It could actually be a very joyful and healing experience.”

Someone posting as TheEnglishGent had an idea: an online streaming service like Spotify or Pandora. “Digitise everything and let us at it for $10 a month,” he wrote.

The Prince vault may have taken on a mythical status but it’s an actual secured location on the grounds of Paisley Park. The compound’s lead architect, Bret Thoeny of California’s BOTO Design, said the musician asked for a walk-in repository similar to a bank vault.

“He wanted a place to keep his master recordings, but at the time it was very important to keep this a secret,” Thoeny told CNN.

The vault is likely to remain locked for months while Prince’s estate is hashed out in probate court. A Minnesota judge granted an emergency temporary appointment Wednesday to a corporate trust company on a request from Prince’s sister, Tyka Nelson, who said her brother did not leave a will. Bremer Trust will tackle immediate business concerns and identify Prince’s heirs, who will presumably decide what happens with the unreleased trove of music.

Prince, 57, died April 21 at Paisley Park. His cause of death hasn’t been released.