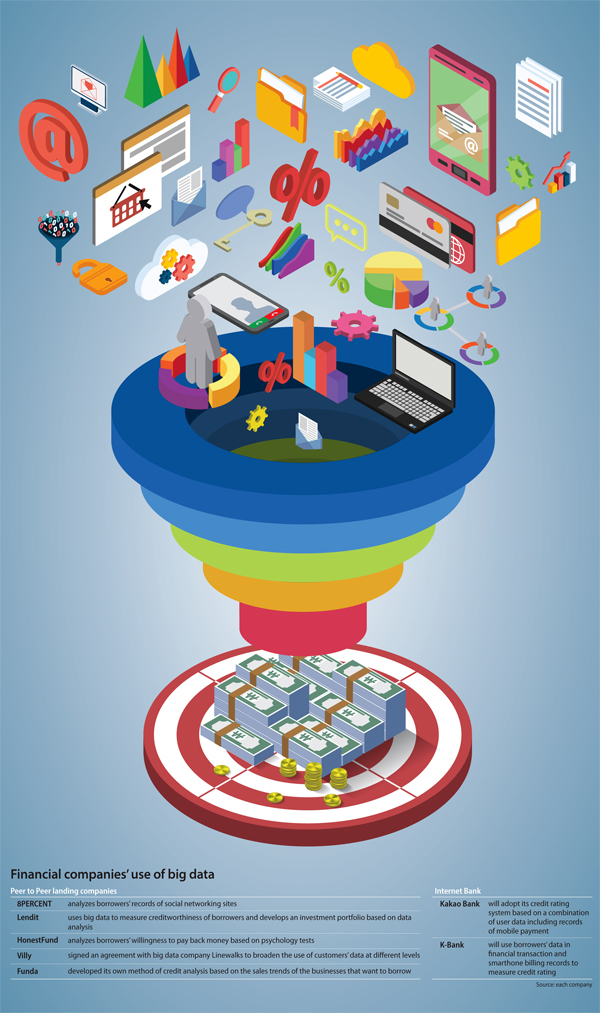 Just a few years ago, Shinhan’s credit cards were just like any other, with reward programs that focused broadly on cash back or discounts at certain stores.

Not anymore. These days, the company’s cards target specific consumer groups, with some designed to benefit single men or entry-level workers and others focused on middle-aged women who care most about their child’s education.

That shift happened as part of Code Nine, a series of credit card programs whose rewards were based on an analysis of “big data” - namely the purchase patterns of the company’s 22 million subscribers.

Big data refers to amounts of information so large or complicated that traditional methods of analysis wouldn’t be able to make sense of them. In the last few years, however, that data has become intelligible thanks to advanced algorithms.

Mr.Life, the latest card in the Code Nine series, is designed to serve single men who live alone. It offers the most discounts at convenience stores, gas stations and big supermarkets - all places where single men most commonly shop, according to the company’s analysis.

As an unprecedented amount of transactions take place online or through mobile platforms, financial firms, including credit card companies like Shinhan Card, banks and financial start-ups, are all vying to use big data to provide more attractive products and maximize sales.

Although the use of big data is a new trend, the success that it has led to has attracted more and more companies.

After launching in 2014, the cards under Code Nine hit more than three million subscriptions in 2015, a new record for the company. As of April 29, that number stood at 4.7 million.

Competitors like KB Kookmin Card and Samsung Card are following suit. These financial services companies are hoping to get an advantage by looking at financial transactions alongside data from social media to better understand consumer behavior, and using this information to better design products or determine credit worthiness.

Fintech start-ups are also banking on analysis of big data.

Companies in the peer-to-peer (P2P) lending sector, where borrowers are directly paired with lenders through online and mobile platforms, use big data to determine things like the credit rating of borrowers and how likely those borrowers are to pay back a loan. 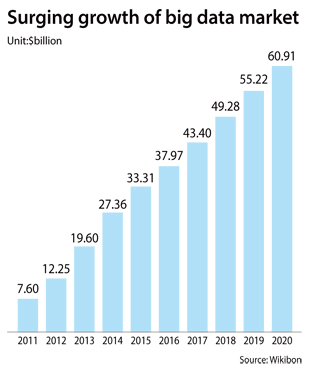 These platforms distinguish themselves from banks and traditional loan companies by not being wholly dependent on traditional means of credit analysis, which focus on customer banking data. On top of credit ratings, the start-ups consider alternative sources of information about an individual’s behavior and characteristics, including social media.

“In deciding credit score and even interest rates, we also refer to data collected from social media because it would help us predict the future financial status of customers,” said Joo Hong-sic, CEO of the P2P lending start-up Villy.

“When an owner of a restaurant chain called Wolhyang applied to borrow money through our platform, the initial interest rate was 7 percent,” Joo said. “But after collecting data about the restaurant from social media, we lowered the rate to 5 percent because a lot of people had posted positively about it.”

Joo said that the company seeks to identify individual borrowers or companies that will likely be delinquent in their payments.

“Linewalks specializes in analyzing big data in the medical sector,” the CEO said, “but we attempt to leverage its expertise to examine the characteristics of overdue borrowers.”

Other companies are going even further, looking at the psychology of customers using special tests or analyses of social media posts to make decisions.

“Borrowers will be asked to undertake a test that lasts six to seven minutes to gauge the probability of delinquency,” said Seo Sang-hoon, CEO of HonestFund. “Besides this, HonestFund has worked on deploying the vast amount of nonfinancial data to correlate the sources with credit rating.”

P2P lender Funda relies on more traditional quantitative data by exploring the sales trends of businesses that want to borrow alongside their credit ratings. The start-up attaches a device to the cash registers of prospective borrowing businesses to track sales trends and seasonal fluctuations in the long and short terms.

Both Kakao Bank and K-Bank, the country’s first Internet-only banks to receive preliminary approval, said that they will rely on big-data analysis to determine credit scores.

K-Bank, led by wireless carrier KT, said that it will consider how timely mobile bills were paid when calculating the credit score of customers.

Still, many companies - particularly smaller start-ups - are having a hard time collecting sufficiently large amounts of data because of a government regulation requiring users to consent before their data is collected or shared.

In response, related government bodies, including the Korea Communications Commission, the Ministry of Science, ICT and Future Planning and the Financial Services Commission, are working to amend the regulation by introducing the method called de-identification.

De-identification is the process of removing identifying information from data to protect users’ privacy.

Under the amended law, financial companies will be able to collect and share de-identified data without requiring users to provide their explicit consent.

“The direction is to allow financial companies to collect non-sensitive information and use them for research and analysis,” said Nam Dong-woo, head of the credit information division at the Financial Services Commission.