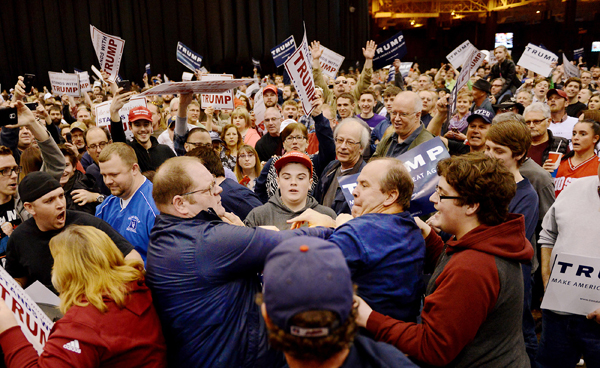 It happened in the evening of Jan. 30, two days before the Iowa Caucus, the first major electoral event of the nominating process for the U.S. presidency.

Republican candidate Donald Trump was canvassing at the Adler Theater in downtown Davenport, and vendors were selling Trump t-shirts and badges. I interviewed one of the vendors to learn about the Trump boom and bought a $15 shirt. Just as I was examining it, the event ended, and Trump supporters came out of the theater. A group of young white supporters passed by and said, in reference to the shirt, “That is so small.”

They were ridiculing my size. They were not being subtle and looked straight into my eyes. They must have been carried away by the excitement of the event.

A few weeks later, I met a Korean-American who served as an executive member of the Republican Party in Virginia. He said that he was concerned about the racist supporters of Donald Trump. Last week, I interviewed Gerry Connolly, co-chair of Korea Caucus, a group of U.S. lawmakers interested in Korean affairs, and he expressed similar concern. Connolly explained that he was of Irish heritage, and so Trump’s call to deport all illegal immigrants hit close to home. He said illegal immigrants should not be demonized because most come to be with their families and find opportunities, not commit crimes.

The United States is a 21st-century empire, albeit not in the traditional definition of the word. Historically, empires prospered from diversity and fell when that diversity was stifled. Zheng He, who led the expedition to Southeast Asia during the reign of the Yongle Emperor, was not Han Chinese but rather born to a Muslim family. The Roman Empire persecuted a new religion from Israel initially but discovered the universality of Christianity and made it the official religion of the state.

As the United States emerged as a central force in the 19th and early 20th century, European immigrants provided a workforce and cultural diversity. Trump’s own grandfather, Frederick Trump, left Germany in 1885 and came to the United States. When an empire is growing, diversity brings the energy needed for expansion. But when diversity triggers discord, the cost of controlling it increases. It has caused rebellions in the past, and today, it is causing social division.

The Washington Post reported that some radical Trump supporters want to break away from the United States and form a community exclusively of white Americans. This is, of course, an extreme case. It does not mean the entire United States agrees with Trump’s messages. But if Trump encourages people to show anger towards those different from themselves, the nation is being tested on whether or not it is an empire with staying power.