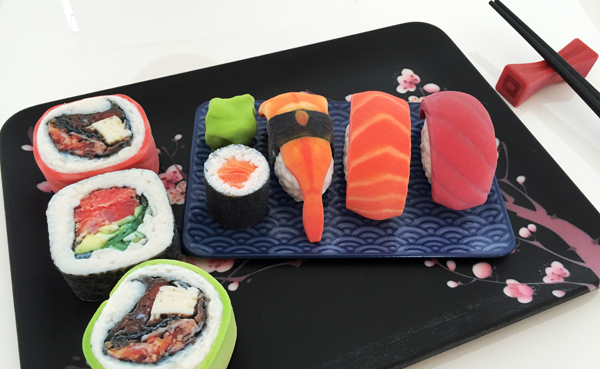 A sushi plate that looks good enough to eat - even though it was produced by the new J750 3-D printer from Stratasys. The latest 3-D printers are creating new possibilities for producers and consumers alike. [PRINTING PROFILE]

Riding the wave of global demand for 3-D printers, American-Israeli company Stratasys unveiled what it claims to be the world’s first full-color, multi-material 3-D printer last week in Korea.

The business-focused J750 printer is able to create products in 360,000 colors from six materials with differing properties - from rigid to flexible and opaque to transparent - thus eliminating frustrating post-processes such as the manual painting and polishing of prototypes. It lets users see a much more realistic approximation of a final product, avoiding mistakes down the line during actual production.

The new model is also expected to compress the development time for a product from an average of 26 weeks to eight weeks, according to Daniel Thomsen, a general manager at Stratasys Korea.

Given that Korea is already a mature market for 3-D printing, Thomsen says the company’s current focus here is on creating a printer that can produce prototypes, the middle stage of a product’s development, rather than just the initial concepts. Eventually, he sees 3-D printers as becoming sophisticated enough to produce final consumer-ready products.

The model represents an impressive innovation achieved in the 3-D-printing industry. Its predecessor, from as recently as 2014, was the first-ever multi-material 3-D printer, but it could only print in a single color.

Kim Young-se, president and CEO of the design consulting firm Innodesign, says the J750 marks the beginning of an era where designers are also their own producers.

To demonstrate this, he pulled out a pair of pink headphones with a wavy headband at a press conference for the J750, held Wednesday at Dongdaemun Design Plaza in central Seoul

“Our team of designers has come up with this in just a couple of days,” he told reporters, explaining that the headphones were the result of collaboration between his company and Stratasys. “We are now in an era when the period required for commercializing a design is just a few days, not a few weeks or a few months.”

The veteran designer and entrepreneur added that the 3-D printer makes it possible for consumers to personalize their things like never before, which he believes will ultimately upgrade the country’s general competitiveness in the design world.

Considered by some to be the “fourth industrial revolution,” 3-D printers have already changed how industrial manufacturers develop products.

But they are set to go even further, effectively producing everything from consumer goods to medical devices, vehicle parts, electronic goods, aerospace components and even weapons.

All this will be facilitated by the addition of a wide range of never-before-imagined materials that are being adapted for 3-D printing, such as carbon fiber, glass, conductive inks, pharmaceuticals and biological materials.

Market researcher Gartner said late last year that 3-D printing was among the top 10 strategic technology trends for 2016. It said in a recent report that 65 percent of supply chain professionals are using or will invest in 3-D printing over the next two years.

“We found widespread acceptance of 3-D printing, which is having a near-term impact on supply chains,” Gartner researcher Pete Basiliere said. “These innovations are driving user demand, as the practical applications for 3-D printers expand to more sectors, including aerospace, medical, automotive, energy and the military.”

Organizations and businesses that stand to benefit from the printers range from consumer product companies, after-service centers and design firms to universities and research institutions, medical device companies, hospitals and medical schools, not to mention special effects and animation companies.

The Food and Drug Administration-approved Spritam (levetiracetam) tablets, which are used to treat epilepsy, were produced through a 3-D-printing technology that stitches together multiple layers of powder to create a porous, water-soluble matrix that is more dissolvable than that of other pills.

Korean start-up Rokit is also making ambitious plans to print artificial organs and human body parts such as the liver, kidney, skull and skin for implantation in the near future. Its Invivo 3-D printer is able to use both scaffolds, or materials engineered to cause desirable cellular interactions to form new functional tissues, and bio-ink.

The company’s CEO, You Seok-hwan, claims the printer will be commercialized within the next eight years after undergoing clinical trials.

Ford Motor is experimenting with a new form of printing developed by Carbon3-D, a start-up backed by Google’s parent company Alphabet, which will enable the printing of parts within an assembly plant itself, rather than requiring those parts to be shipped in, drastically reducing transport and logistics costs as a result.

Several leading athletic brands have also been working on 3-D-printed sneakers in recent years to speed up the design process and create faster prototypes of new shoe designs.

The ultimate goal of these companies is to create a whole new category of customized products through 3-D printing. After a quick scan of a runner’s foot, the customer can pick the color and form of the shoe, and print it right there in the store.

Adidas last October introduced a prototype for Futurecraft 3-D, a running shoe made with a 3-D-printed midsole that can be tailored to a runner’s foot.

“Imagine walking into an Adidas store, running briefly on a treadmill and instantly getting a 3-D-printed running shoe,” Adidas said in a statement. “This is the ambition of the Adidas 3-D-printed midsole.”

New Balance, which has been testing 3-D-printed midsoles for a few years, sold a limited-edition running shoe with a 3-D-printed midsole called Zante Generate during the Boston Marathon on April 14. Forty-four pairs were sold, and each cost $400.