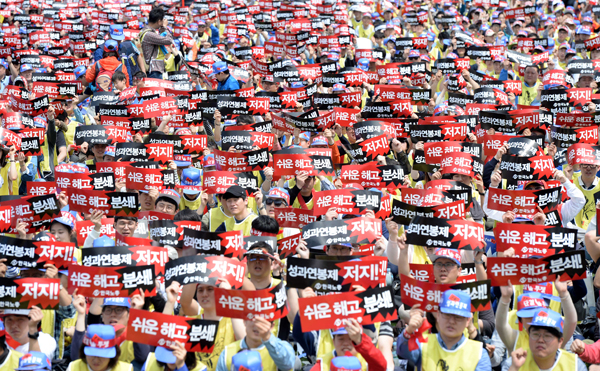 Thousands of members of the Federation of Korean Trade Unions gather on Sunday at Seoul Square in central Seoul to commemorate Labor Day with a massive rally, holding banners that mostly read “Crush Easy Dismissals.” [NEWSIS]

This Sunday, Labor Day, was marked with thousands of labor union members marching in the streets in support of workers’ rights as the country’s two largest labor unions, the Korean Confederation of Trade Union (KCTU) and the Federation of Korean Trade Unions (FKTU), joined hands.

The KCTU held rallies in 15 different areas across the country and claims 50,000 people joined in, some 15,000 of which gathered in the capital. Seoul’s convention began with a 3-kilometer (1.86 mile) march from the Daehangno neighborhood to Mojeon Bridge, both in Jongno District, central Seoul. Nearby, the FKTU held a separate rally comprising about 30,000 people in front of the Seoul Metropolitan Government building at Seoul Square, central Seoul, followed by a 2-kilometer march to Hanbit Plaza, along the Cheonggye Stream.

While Korea’s Labor Day has often made headlines with its large-scale rallies, this year’s protests received particular attention for blocking the contentious labor market reform bills from passing the National Assembly.

Chiefly backed by the Blue House, supporters claim the labor reform package will create nearly 370,000 news jobs for young people over the next five years. Furthermore, it will allow temporary workers who are 35 years and older to continue working on temporary contracts for up to four years, as opposed to the current two-year limit. But labor unions have argued that the bills would incentivize employers to prefer temporary workers, thus further aggravating job market conditions.

The president’s Saenuri Party issued a statement over the weekend supporting the labor reform bills, in stark contrast with the main Minjoo Party of Korea, which expressed its opposition to the bills.

The People’s Party aimed for a more neutral stance, contending that it seeks a national consensus before making its decision.