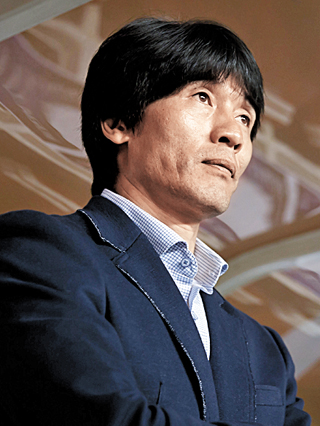 K-League Classic’s Pohang Steelers is in a quandary. One of Korean professional football’s elite clubs, Pohang’s shelf is decorated with awards and titles from various events including five K-League trophies and several Asian Champions League (ACL) and Korean Football Association (FA) Cups titles. Understandably then, fans never expected Pohang might find itself struggling. However, after manager Choi Jin-cheul had to move the team captain and one of its key midfielders, Hwang Ji-soo, to the disabled list, Pohang’s chance for the championship title this year seems bleak at best.

The 35-year-old midfielder fractured his nose in the K-League seventh round match against the Jeonnam Dragons FC when he leapt into the air to dramatically take possession of the ball, crashing into Jeonnam’s Macedonian forward Stevica Ristic. The captain is likely to be out of the league for three to four weeks, and his injury adds more burden to Pohang and manager Choi, who is still yet to recover from the shock of losing Son Jun-ho earlier this month.

Son, Pohang’s other vital midfield asset, suffered a ruptured cruciate ligament in his right knee and will need at least six months of rehab, putting a solid end to his season.

April was a cruel month for Pohang and manager Choi.

Choi assumed his first post as the manager at Pohang steel yard before this season. Although the former national team defender, who led the Taeguk Warriors to the semifinals of the World Cup in 2002, no doubt expected some rough winds ahead, Pohang’s skipper could never have foreseen a maelstrom of this magnitude.

“I knew it wasn’t all going to be easy,” said Choi over the phone. “But continuous injury and key players out of the games, it’s not something I expected.”

Out of the eight games the Pohang team has played, it’s had two wins, three draws and three losses, finishing the month of April ranked eighth in the K-League Classic standings. Granted, they did secure a win over Lee Keun-ho’s Jeju United FC over the weekend on Saturday. However, considering the score and the quality of match, it would still be far-fetched to say that Pohang clinched the win on its own, as opposed to taking advantage of Jeju’s inability to finish their shots. Indeed, Jeju-based team outpaced Pohang in many ways including ball possession, at 54.55% compared to 45.45%, and shots attempted, at 16 compared to 6.

In competitions outside of Korea, the team has already failed to qualify for the next round of the Asian Champions League (ACL) with one win, one draw and three losses, despite there still being one game to go in the group stage.

Everything happened so fast in the span of one month and Choi is certainly paying his dues as a rookie manager.

Hindsight may be 20/20, yet Pohang’s struggle was still somewhat predictable, as several key footballers left the team including striker Ko Moo-yeol, who transferred to Jeonbuk Hyundai Motors, and forward Kim Seung-dae, who transferred to Yanbian Funde in the Chinese Super League. With the team’s roster absent of some of the key players it depended on during past seasons, the bad luck piled on with players like Son and Hwang being injured. Such a situation would be tough even for a seasoned manager, much less a newcomer like Choi.

But April, it seems, may yet breed a few lilacs, as the team hopes things might turn around with Oh Chang-hyeon and Jo Soo-chul expected to return from their injuries to fill in the midfield gaps. Also, Hwang’s injury is not as dire as that of Son’s.

“With a hole in the middle of the field, we will have to utilize the players we have available, perhaps by bringing up defender Lee Jae-won, who is capable of playing in multiple positions,” added Choi.