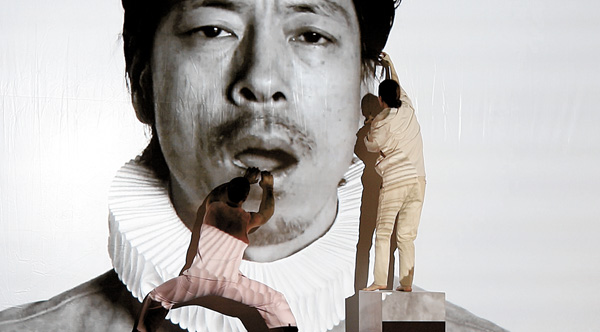 Kim C of Hot Potato plays the role of Shakespeare in “Shakespeare Needs You,” a dance performance directed by Billy Cowie, the famous choreographer and artist, in April. [BILLY COWIE]

William Shakespeare is in no need of elaborate modifiers, as his work explains him best. This year, the British Council holds the “Shakespeare Lives” project to promote cultural understanding among countries that celebrate his work.

“He wrote comedies and tragedies that closely reflect human minds and emotion and this is what makes his work relevant today,” said Rosemary Hillhorst, who directs the “Shakespeare Lives” program.

“The British Council works in essence to promote friendly understanding between people in the United Kingdom and elsewhere,” she said, explaining that this program is in line with its objective.

Started earlier this year, the program will provide various cultural experiences until the end of this year. The program operates worldwide, but is adjusted according to the local needs of each country. The Korean version of the program is titled “Shakespeare Korea.”

In Korea, Everland opens the “Shakespeare Rose Garden” from May 5 to June 12 in collaboration with the council. As Shakespeare’s Emilia is quoted as saying, “Of all flow’rs Me thinks a rose is best,” the garden will be full of various types of roses and flowers. Also, famous lines from his works and sonnets will be exhibited along the garden.

Furthermore, “Shakespeare in Cinema” is prepared to take a look at how his works are being remade nowadays by watching several recent productions.

Eight selected movies will be screened domestically, including the 1971 movie “King Lear” by Peter Brook, “Macbeth” by Roman Polanski and “Hamlet” by Kenneth Branagh. The Jeonju International Film Festival will screen the movies until Saturday; from May 12, CGV Art House will carry the bard’s baton to meet the audience.

Also, the “Shakespeare Reworked” project adds a contemporary flavor to the master’s plays. For example, his play “As You Like It” will be remade with the collaboration of Korean artists, and will take place in contemporary Seoul. The British Council offers numerous cultural programs for Korea - in the fall, it plans to carry out a project reinterpreting his sonnets by delivering them in the form of webtoons, and it will offer English education resources for teachers. For more information, visit https://www.britishcouncil.kr/programmes/shakespeare-lives.