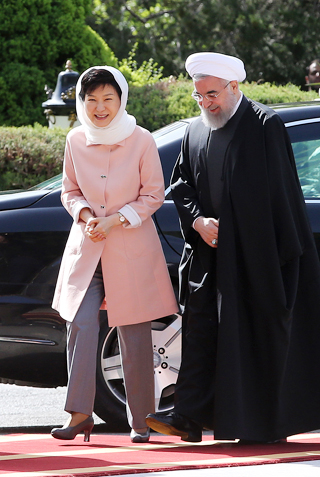 “We want a change on the Korean Peninsula,” Rouhani said in a joint press conference with Park following their summit at the Saadabad Palace. “In principle, we are opposed to any nuclear development.

“It is our basic principle that dangerous weapons and nuclear weapons disappear on the Korean Peninsula, and in the Middle East in particular,” he added.

At the press conference, Park said she explained her policy of zero tolerance for the North’s nuclear program and denuclearization efforts during the summit with Rouhani and sought Iran’s cooperation.

Rouhani said bilateral trade will be expanded by three times, and a direct air route between Tehran and Seoul will open. He said Korean companies will be able to make direct investments in Iran, operate joint ventures and transfer technologies.

Park’s four-day trip, which began Sunday, is the first state visit by a South Korean president to Iran since the two countries launched diplomatic ties in 1962. In 2010, before Korea imposed sanctions on Iran for its nuclear program, bilateral trade totaled some $17.4 billion. It dropped to $6.1 billion in 2015 after a number of cooperative economic projects, already underway in Iran, were suspended.

After international sanctions were lifted with a historic nuclear deal, Seoul also lifted its restrictions earlier this year, and Park headed to the country to win business in the promising market. The largest-ever economic delegation of 236 businesses accompanied Park.

Some 66 memoranda of understanding were signed between Korea and Iran as of Monday, the Blue House said. It said the summit was the greatest economic diplomacy accomplishment of the president.

According to the Blue House, provisional contracts and memoranda of understanding were signed on 30 massive infrastructure and energy projects in Iran. In total, the deals are worth about 42 trillion won ($37.1 billion). Taking into account follow-up construction for some projects, the deals will be worth as much as $45.6 billion, the Blue House said.

“We made a conservative estimate by saying that we won deals worth $37.1 billion,” a presidential aide said. “The actual economic accomplishment will be far larger.”

Among infrastructure projects, Korea secured a railway bed construction and train car supply project for a railroad linking Ispahan and Ahvaz, which will be worth $5.3 billion. Korea also won a $1.5 billion Tehran-Shomal highway project.

The memoranda of understanding signed Monday also include a Bahman Geno oil refinery construction project, in which a total of $10 billion will be invested in two stages. For medical and health programs, Korea will help build six hospitals worth $1.7 billion.

According to the Blue House, the Korean government will launch a $25 billion financing program for Korean companies’ bids in Iran. The Export-Import Bank of Korea will supply $15 billion, the Korea Trade Insurance Corporation will provide $6 billion and a consortium by the Ministry of Strategy and Finance will chip in $4 billion.

An Chong-bum, the senior presidential secretary for the economy, said during a press briefing in Tehran that he hopes the trip will stimulate a second “Middle East” boom in Korea.