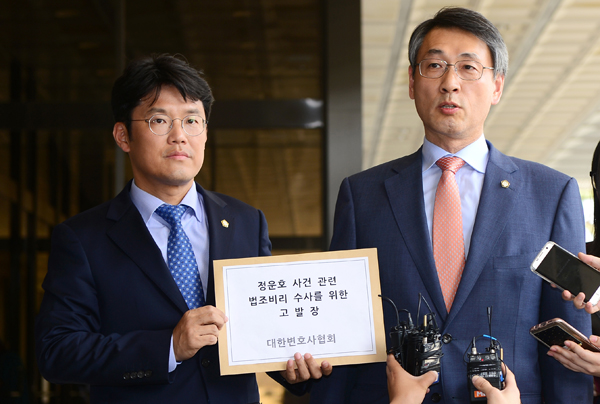 The influential Korean Bar Association (KBA) called upon local prosecutors to investigate Jung Woon-ho, CEO of the popular cosmetics brand Nature Republic, on allegations of lobbying a myriad of people in the legal profession with at least 5 billion won ($4.39 million) in an illegal overseas gambling case.

The group lodged an official complaint with the prosecution on Monday, claiming that a special investigation team should be organized for the probe, comprised of members completely detached from each suspect.

Around 10 people in the legal circle, including a prosecutor, a lawyer and a judge, were mentioned as key subjects for questioning; the KBA asserted they were lobbied by Jeong, who is now serving an eight-month jail term following his conviction for gambling in illegal poolrooms in the Philippines and Macau from March 2012 to October 2014.

Jeong was arrested last October for betting over 10 billion won. The prison term is scheduled to end in August.

In his first trial, the 52-year-old businessman was sentenced with up to a year in prison, to which he appealed and had it reduced to eight months in his second trial. The appellate court at that time said Jeong was repenting his wrongdoings and that he donated a colossal amount of money to a social fund tackling gambling addiction.

In explaining why they think the suspects had pocketed black money from the business mogul, the KBA focused on the shortened jail term in the second trial, claiming that his acquaintances were either directly funded by Jeong or heavily influenced to make decisions that would benefit him.

The prosecution did not immediately say whether they would pick up the case, but the JoongAng Ilbo cited various sources on Monday as saying that a number of businessmen were called in for questioning over the weekend on accusations that they had personally introduced high-profile lawyers to Jeong.

Media attention on Jeong recently shot up when it was revealed two weeks ago that one of his lawyers sued him for physical abuse. The female victim, 46, asserted she was assaulted by the CEO on March 12 during an altercation over her legal fees while visiting him in jail.

Local police said Jeong twisted her arm and yelled expletives at her.

Police later told reporters that fissures between the two sides had been running deep due to disagreements regarding Jeong’s compensation for his legal services. The CEO has reportedly demanded that his lawyers return the extra 2 billion won he paid in advance in case he got out on bail, as those efforts fell through.

The female lawyer has asserted otherwise, saying the money was used on additional counseling fees that weren’t initially agreed upon. Police said she detailed her plights, explaining that she and some 20 other lawyers had to visit him in jail almost every day for three months and deal with other civil and criminal lawsuits ranging from sexual assault to physical abuse.

The lawyer denied that the extra cash was offered as a tip, but claimed she and her colleagues were promised 3 billion won if they managed to release him from prison.

The brouhaha eventually led the KBA to doubt the legitimacy of Jeong’s reduced jail term and wonder whether any other shady deals had passed under the radar, prompting the organization to push local prosecutors on Monday to investigate the case from square one.