Severed body discovered by tourist in an Ansan gutter

Severed body discovered by tourist in an Ansan gutter 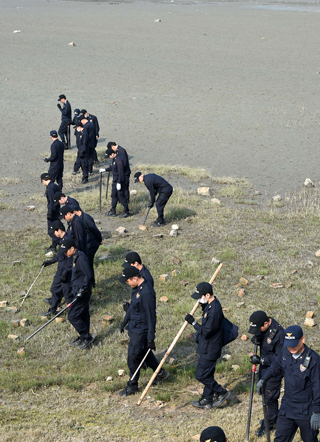 A man’s lower body was found in a gutter near the Buldo seawall in Ansan, Gyeonggi. Police are inspecting the nearby coastal area where the remains were found. [NEWSIS]

A man’s naked lower body was found by a tourist wrapped in a cloak in a gutter near the Buldo seawall in Danwon District, Ansan, Gyeonggi, at 3:50 p.m. on Sunday.

It is presumed that a sharp weapon severed the body at the navel. The corpse showed signs of decomposition when found.

Police are having the body’s DNA examined and are distributing flyers to identify the victim. About 900 police men from 10 police squadrons and two drones are inspecting the crime scene as well as the nearby area to find the rest of the victim’s body.

On April 5, 2015, at a gutter in Siheung, Gyeonggi, a woman’s torso was found. The police, after searching for four days, found the rest of her corpse on April 8.

The murderer turned out to be her husband, a Chinese-Korean named Kim Ha-il, 47, who strangled his wife to death, dismembered her body and discarded it near the seawall.

There’s a close resemblance between the two cases, as both involve severed bodies and both corpses were abandoned near seawalls along Road 301, which lies in the southwestern part of Gyeonggi, next to the coast.

According to experts, corpses are often abandoned near seawalls due to the lack of CCTVs or potential witnesses and because police will have difficulty in collecting the bodies.

In June 2015, after Kim Ha-il’s murder case, the police installed 28 CCTVs near the gutter in Siheung. The advent of another abandoned and dismembered corpse near the Buldo seawall, however, has triggered calls for the installation of additional surveillance cameras near other seawalls.

“Installing CCTVs near every seawall will be, resources-wise, very difficult,” said Bae Sang-hun, a professor from the department of police science in Seoul Digital University, “but the role of surveillance cameras is very important in deterring criminals from abandoning corpses.”