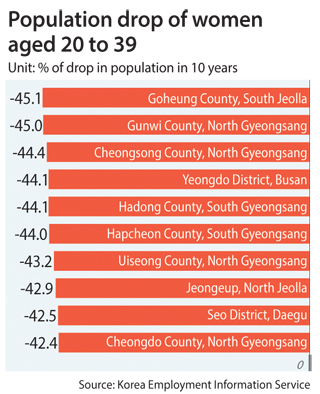 With fewer women choosing to live in remote areas of Korea, up to 80 counties, cities and districts are in danger of disappearing altogether within a few decades as their birth rates are drastically dropping.

The Korean magazine Economist (no relation to the British publication), published by the JoongAng Ilbo, and Lee Sang-ho, deputy researcher of Korea Employment Information Service, computed 2015 population data from 252 out of a total of 262 counties, cities and districts throughout the country, and analyzed the population of women aged 20 to 39, as well as senior adults over 65. The research group focused on women between 20 and 39 because more than 90 percent of childbearing women fall within this range.

“The best preventive measure is to maintain a 1-to-1 ratio of young women to the senior adults,” said Lee, deputy researcher at Korea Employment Information Service. “If the ratio falls below 0.5, then we can assume that people will stop living in this region before long.”

The 19,513 people over the age of 65 occupied 36.2 percent of population in Uiseong County as of 2015, which reached 53,889 and was the second-highest level in the nation after Goheung District of South Jeolla. The county’s 3,349 women of childbearing age, on the other hand, made up only 6.2 percent of the population, the lowest in the nation. The county’s population ratio of childbearing women to senior adults over 65 was 0.17, meaning there are as many as 17 childbearing women per 100 elderly in the county.

Speaking to these statistics, the county has been absent of obstetrics centers for 18 years, the last one having gone out of business in 1997 for lack of patients. Then, breaking traditions, an obstetrics center was established in March this year in the county’s Angye-myeon, but not because residents demanded the service. Rather, it was because Angye-myeon was designated by the Ministry of Health and Welfare as a region with poor local services for pregnant women.

“There is no woman here who is going to give birth anytime soon,” said a local resident named Park Jong-hwan. “I’m not sure if the center will be able to operate regularly.”

Goheung County of South Jeolla and Gunwi County of North Gyeongsang followed suit, Goheung with a ratio of childbearing women to senior adults at 0.18 and Gunwi with 0.19.

“A common factor found in many of these regions deserted by young women is that they tend to be located near traditional manufacturing businesses,” Lee said. “With the decline of such industrial complexes, many young women may be compelled to leave.”

Leaving such remote regions, women are gathering in new towns and regions were large companies have moved in. The Yeongtong district of Suwon is one such region popular among young women.

Out of Yeongtong’s total 334,266 residents, its 55,630 women of childbearing age make up 16.6 percent of the district’s population. That’s the sixth highest among the 252 counties and cities surveyed. Its senior adults over 65 make up 5.39 percent of the district’s population, the second lowest in the nation after Seongsan District of Changwon. And the ratio of childbearing women to senior adults over 65 is 3.09 in Yeongtong, the highest in the country and the only region in the country to have a ratio above 3.0.

This ratio is followed up by Seongsan District of Changwon with 2.61, and Buk District of Ulsan with 2.21.

Young women have a good reason for taking a liking to Yeongtong. In the center of the district lies Gwanggyo, the 11.3 million square-meter (4.3 square-mile) development which is situated where Yeongdong, Gyeongbu and Yongin-Seoul Expressways intersect. The new town has apartments able to accommodate some 30,000 households.

“The center is perfect because I can ask them to take care of my child for a few minutes while I have to get a medical checkup or go to the supermarket,” said Lee Jeong-min, a 31-year-old mother raising a 2-year-old son in the district. “The service is cheap [at 2,000 won ($1.75) per hour, and 1,000 won per hour for double-income households], and I can trust the center.”

The 1.5 million square-meter Samsung Digital City, sitting across from Yeongtong District Office, only adds to the allure of the district.

Not all big cities attract young women, however. Yeongdo District of Busan and Seo District of Daegu have seen a steady decline of women aged between 20 and 39 in the last decade.