An’s second place finish is his best result in PGA

An’s second place finish is his best result in PGA 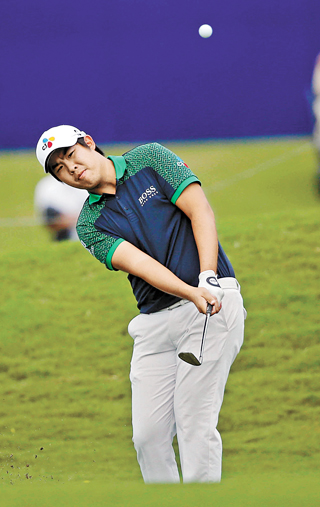 Korean golfer An Byeong-hun watches his shot during the final round of Zurich Classic on Tuesday. [AP/NEWSIS]

Korean golfer An Byeong-hun narrowly missed his chance to grab his first career PGA win on Tuesday after finishing second at the 2016 Zurich Classic in Avondale, Louisiana.

In the third and final round of the Zurich Classic of New Orleans at TPC Louisiana - which was shortened to 54 holes after the tournament was hit by rain - An went 15-under by sweeping six birdies in the last 12 holes on Tuesday and finished in first position with Brian Stuard and Jamie Lovemark of the United States.

An made his comeback towards the end of the round with birdies in the 13th, 14th and 15th holes, including a 9-meter birdie in the 4-par 15th hole. Behind the leader by one stroke, An nailed the birdie putt in the 18th hole to match Stuard and Lovemark on the leaderboard.

Eventually forced into a three-way playoff, Stuard outperformed An and Lovemark to top the tournament to grab his first PGA tour win.

Finishing second place is the best result An has had in the PGA. The 24-year-old Korean bested the 2015 BMW PGA Championship on the European Tour but he is without a win in the United States.

During the World Golf Championship-Dell Match Play in March at Austin Country Club in Austin, Texas, An advanced to Round of 16 and lost the match to Rafa Cabrera Bello of Spain. Excluding the Match Play, the best finish An’s had in the PGA tour was tying for 36th in the Arnold Palmer Invitational in March along with Choi Kyoung-ju.

After the second position finish on Tuesday, An is expected to move up from No.31 to within the top 20 in the World Rankings.

Noh Seung-yul, who won the Zurich Classic in 2014, finished the tour tied at 20th with an 8-under record.