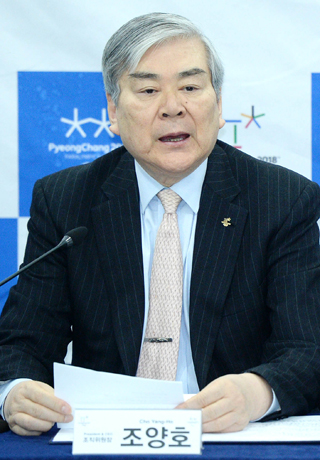 Hanjin Group’s chairman Cho Yang-ho stepped down from his position as the president of the PyeongChang Organizing Committee for the 2018 Olympic & Paralympic Winter Games on Tuesday. Cho’s intention behind his resignation is to focus on salvaging his company from ongoing problems. [NEWSIS]

Cho Yang-ho has resigned as president and CEO of the PyeongChang Organizing Committee for the 2018 Olympic & Paralympic Winter Games (Pocog).

Cho, who is also the chairman for the Hanjin Group, relinquished his management of the group’s container carrier division, Hanjin Shipping, last month to allow its creditors to restructure the shipping company that is struggling with operating losses.

Cho is leaving the top job at the winter games organizing body to focus on the group. “After stepping down from his office at Pocog, Cho will work to deal with urgent issues that the Group is facing,” the Hanjin Group announced on Tuesday. “Cho and the Group will work closely with the creditors to normalize the management of Hanjin Shipping.”

To fill in the vacancy, the former minister of Trade, Industry and Energy (MOTIE) Lee Hee-beom has been nominated for the position, according to the Pocog on Tuesday.

Born in Andong, North GyeongSang, Lee graduated from Seoul National University with a degree in electrical engineering. After passing the civil service exam in 1972, he’s served as the MOTIE minister from December 2003 to February 2006.

Currently, Lee works as an advisor for LG International. With less than two years to go until the winter games, Pocog will have to rely on new leadership to pull off a successful Winter Olympics.

Cho was active in PyeongChang’s successful bid to host the winter games over Munich and Annecy.

He assumed the top position of Pocog in August 2014 to oversee preparations for the winter games. During the following two year period while he headed Pocog, Cho has helped the organizing body with many issues.

In particular, critical issues such as the delayed venue construction, a dispute on the location of Olympic Stadium, marketing sponsorship recruitment and the controversy over moving venues following Olympic Agenda 2020 were resolved under his watch, according to Pocog’s statement.

In addition, Olympics test events such as the FIS Alpine World Cup at the new Jeongseon Alpine Centre in February 2016 were carried out successfully, despite many doubts that the construction of the venue would not be completed on schedule.

“For the past two years, I have truly put forward my very best efforts to work with every member of the Organizing Committee to prepare a successful Olympic and Paralympic Winter Games in 2018,” said Cho. “I can proudly say that Pocog has become a strong team, and the challenges we have overcome have allowed us to achieve success at our first official test events this past February.

“I would like to express my sincere appreciation to the Korean people for their support of PyeongChang 2018,” added Cho.

“More than anything else, I am deeply grateful for the passion and dedication of each and every employee of Pocog under my leadership. I am confident that Pocog and the new leadership will move forward towards a successful 2018 Winter Games. I give my assurances that I will continue to support PyeongChang through to the Games in 2018,” said Cho.

Cho’s absence from the organizing body is a major loss for Pocog. Cho’s resignation, which went into effect immediately, was not anticipated by the organizing body. “Hanjin Group is in a predicament by the situation with Hanjin Shipping,” said an official from Pocog. “It is our understanding that Cho decided on his resignation in less than a week.”