Imagining a new city, right down to the chairs

Imagining a new city, right down to the chairs 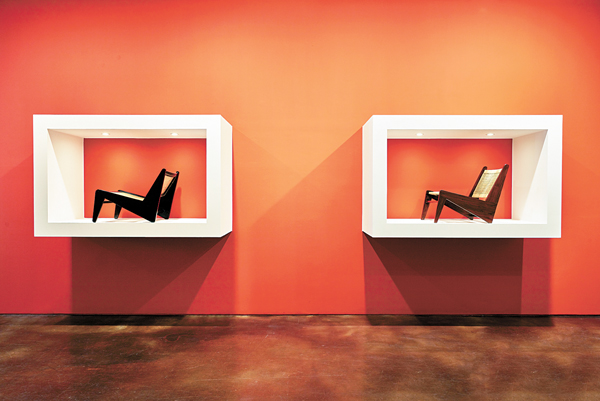 Kangaroo Chairs, also known as “Easy Chairs,” that were designed by Le Corbusier and Pierre Jeanneret as part of a project to design a new capital city for India’s Punjab state, are on display at the Kukje Gallery. [KUKJE GALLERY]

When India won independence from British colonial rule in 1947, the state of Punjab was divided between India and Pakistan.

India decided to hand over the capital of Punjab to Pakistan and establish a new capital of Chandigarh. For this grand-scale project, renowned Swiss-French architect, designer and painter Charles-Edouard Jeanneret-Gris, better known as Le Corbusier (1887-1965), was commissioned.

Le Corbusier, together with his cousin Pierre Jeanneret (1896-1967), also a celebrated architect, created a master plan for the city and built governmental buildings such as the famous Palace of Assembly.

Their joint project didn’t stop there. They even worked together on designing various pieces of furniture ranging from library tables and chairs to beds used by government officials who worked and resided in the new capital.

At the ongoing exhibition titled “Le Corbusier, Pierre Jeanneret: Chandigarh, India, 1951-66,” at Kukje Gallery’s K2 Space in central Seoul, visitors can see how the two architects’ modernist philosophy was incorporated not only in their designs of the city and its buildings but also in the furniture.

“The exhibition frames the collaboration between the two architects by presenting one of the largest cohesive groupings of furniture from this historic site, providing a rare opportunity to see their avant-garde ideas,” said an official from the gallery.

The exhibition includes chairs, cabinets, cots, sofas and desks, all of which were produced as part of the city planning project. Some pieces are by Le Corbusier or Jeanneret individually, some are collaborations, while others were designed by others who took part in the project.

“But we didn’t specify which is done by who as visitors can have fun witnessing the two architects’ iconic designs embedded in their works, which have the instantly recognizable shapes of ‘X,’ ‘U’ or ‘V’ in the legs,” said Jay Chung, director of Vintage 20, a Manhattan-based firm specializing in mid-century European furniture and decorative art, who organized the exhibition.

The materials used in the furniture, such as rose wood, teak and bamboo, were easy to obtain in India, according to Chung.

“The use of such plain and accessible materials was in contrast to classicism, which used a lot of expensive materials like zebra or palm trees,” said Chung, explaining that it also helped their furniture be mass produced.

The exhibition runs until May 29. For more information, visit www.kukjegallery.com.