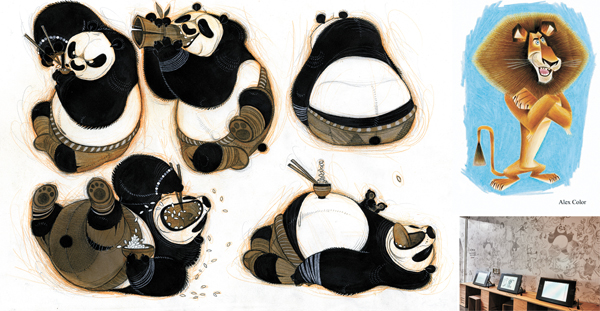 Hundreds of original drawings are on display at the DreamWorks exhibition at the Seoul Museum of Art in central Seoul, including ones of Po from “Kung Fu Panda” by artist Nicolas Marlet (above) and Alex the Lion from “Madagascar” (top right). Visitors can also try software programs that DreamWorks animators use to sketch characters, change facial expressions and so on at kiosks (above right) set up at the exhibition. [SEOUL MUSEUM OF ART]

It’s not often that you can visit an art museum with young children without having to constantly shush them or even carry a crying one outside.

But in this “month of family” - with Children’s Day on May 5 and Parents’ Day on May 8 - several museums and galleries are offering exhibitions that cater to both adults and children. 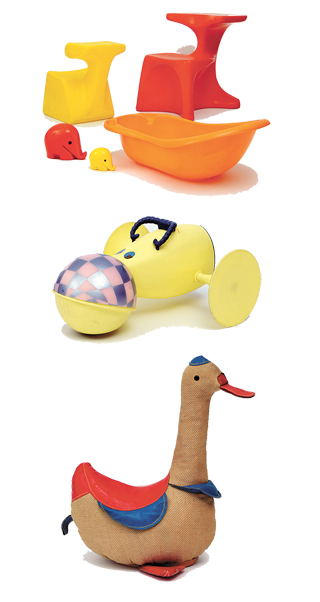 Children’s chairs and toys are on display at the Kumho Museum of Art including works by (from top) Luigi Colani, Philippe Stark and Renate Muller. [KUMHO MUSEUM OF ART]

The 30-foot panda, which fans will recognize as Po from the popular “Kung Fu Panda” series, that’s currently standing outside the Seoul Museum of Art (SeMA) in central Seoul will instantly draw kids inside. Yet, the exhibition is more than just cartoon characters, with plenty for adults to enjoy.

The art museum is holding a special exhibition titled “DreamWorks Animation: The Exhibition,” showcasing dozens of characters from 31 DreamWorks animation films, from its first theatrically released film, “Antz” (1998), to the recent “How to Train Your Dragon 2” (2014).

“Recently, SeMA has been making efforts to bring in exhibitions that disrupt genres, and this exhibition focusing on animation films is a part of that effort,” said Kim Hong-hee, director of the city-run art museum. “We first enjoyed animation as comic books on paper, and now it has converged with multimedia and has even been influencing the genres of modern art and media art, forming close relationship with each and placing itself as the new cutting-edge multimedia art genre.”

According to Kim, visitors will be able to witness the effects of such “convergence” of animation and technology at this exhibition, subtitled “Journey from Sketch to Screen.”

The exhibition, which is touring the world to celebrate the 20th anniversary of DreamWorks, was co-created by the Australian Centre for the Moving Image (ACMI) together with DreamWorks. The Seoul exhibition runs until Aug. 15.

Divided into three sections, the exhibition features over 400 rare and never-before-seen concept drawings, models and original artworks, as well as video clips of animation films and interviews with the animators and storytellers who work at DreamWorks.

“It’ll give visitors a sense of what it’s like to be at DreamWorks’ campus in California,” said Sarah Tutton, senior curator at ACMI. “The exhibition tells the story of the how DreamWorks’ films are made.”

Kids expecting to see life-sized characters inside the exhibition will feel let down for few moments, but soon they’ll be fascinated by the video clips showing representative scenes from the films.

The “Character” section is full of original sketches and models of DreamWorks animation characters. According to the docent, two-dimensional sketches of the characters are turned into three-dimensional miniature models to help animators study the details such as the exact ratios of their bodies, how they cast shadows and so on.

In this section, there’s also an interesting video clip showing animators having a lot of fun playing the characters before they get to drawing. Tom McGrath, who directed “Madagascar,” says in the interview that it’s important for the animators to play the characters they will draw, record their short performances and watching the recording before drawing as it helps them study the body language and become absorbed in the character.

In the “Story” section, visitors can witness how stories are created and connected by storytellers and animators, while in the “World” section they see how different scenes are made such as African landscapes in “Madagascar: Escape 2 Africa” (2008) and ancient Chinese settings in the “Kung Fu Panda” series.

“Animators often visit the locations before drawing, and that’s how the animations turn out so realistic,” said the SeMA docent. “They are said to have even learned kung fu to realistically portray the movements in the ‘Kung Fu Panda’ series.”

Throughout the exhibition, there are several kiosks where visitors can try out the software that animators use at DreamWorks to change the facial expressions of characters, create ocean waves and even create a new character from scratch.

According to Tutton, the key part of the exhibition the organizers put most effort into is “Dragon’s Flight: A Dragon’s-Eye View of Berk,” where visitors are invited into a 180-degree projection room. For this experience, animators created additional scenes of Berk, the Viking township from the “How to Train Your Dragon” series. Riding on the back of Toothless the dragon, visitors can see the island of Berk being created in front of their eyes as colors and shading are added to the sketches.

“This three-and-a-half-minute video clip really sums up what we were trying to do - take it from that very first idea right through to that very emotional experience of being in somebody else’s world,” said Tutton.

“Animation is truly an art form - the convergence of art, media and technology,” said Eric Stevens, head of global live entertainment at DreamWorks. “The exhibition truly has something for everyone. Boys and girls who love Kung Fu Panda, Shrek, or Madagascar, to the fine art students or film students inspired by storytellers at our studio or anyone interested in filmmaking ,all the way to true fine art enthusiasts.” 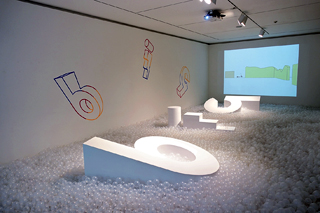 A ball pit for kids set up on the first floor of the Kumho Museum of Art as part of the “Big: Kids and Design” exhibition. [KUMHO MUSEUM OF ART]

A place to sit, and play

There’s another exhibition going on in central Seoul where both kids and parents can have an equal amount of fun.

Since last week, docents at the Kumho Museum of Art in Jongno District, central Seoul, have been getting ready to greet excited children - even screaming ones - at their usually quiet art museum.

The recent “Big: Kids and Design” exhibit that kicked off April 29 houses a large array of furniture for children, focusing on chairs and desks by internationally influential designers of the 20th century including Peter Keler, Luigi Colani and Renate Muller, as well as some contemporary works by Korean designers.

Parents won’t have to worry about stopping children from touching the works as they are allowed to sit on most of the chairs on display.

“The function of a chair for adults is just to sit down, but for small kids everything around them becomes their playground, including chairs,” said Jung Seo-yoon, assistant curator at the Kumho Museum of Art. “Chairs also turn into a tool to play with. They jump over it and roll it around and learn through such activities.”

That is why, Jung explained, so many different shapes and colors of chairs can be seen at the museum.

“There are rocking chairs, some have wheels on them, and some can function as a chair and a toy,” said Jung.

The third floor of the art museum is dedicated to toddlers and children under 5. According to the museum, furniture for young children up until the early 1900s was miniaturized versions of furniture for adults, with more importance placed on function than on design. After the 1930s, the design of furniture and the importance of playing started to be emphasized by furniture designers, starting in Northern Europe. In this section, children can also lie down on beanbags and look up at chairs hanging from the ceiling.

“We wanted children to run around, lie down and have some time to relax in the museum for a change,” explained Jung.

Designs from Korean artists and brands including Seo Hyun-jin, Yang Seung-jin, Kamkam, MAEZM, Ha Ji-hoon and Hwang Hyung-shin are displayed on the second floor of the museum. The local designers also got together to create a playground by up-cycling disused chairs that were once used at schools. By painting them all in white and connecting the chairs together, the designers created various structures such as a small jungle gym.

The basement floor of the museum is dedicated to displaying diverse designs of desks and chairs for young students that date back to 1930. According to the museum, parents can take a look at changes in the design of desks and chairs that coincide with the changes in the social perception of children and their rights, including the adoption of compulsory education systems across the world.

Meanwhile, the highlight of the exhibition for kids is the ball pit on the first floor. Here kids can take off their shoes and jump in to play while parents take more time to look around the exhibition.

Various programs for children are also being organized during the exhibition, which runs until Sept. 11. There will two special lectures in May and June about designs for children and about six workshops between July and August on making small toys and children’s furniture with artists. Specific dates will be announced on the museum’s website at www.kumhomuseum.com/eng. Tickets for the exhibition cost 7,000 won for adults and 5,000 won for children.