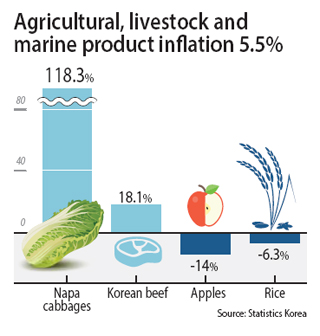 The inflation rate remained flat at 1 percent in April, the same rate as in March, according to Statistics Korea and the Ministry of Strategy and Finance on Tuesday. Following inflation rates of 0.8 percent in January and 1.3 percent in February, consumer prices are plainly static.

The 1-percent inflation rate was largely due to low crude prices. Gasoline prices fell 9.9 percent last month compared to a year earlier while diesel saw a sharper drop of 15.2 percent in the same period and liquefied petroleum gas (LPG), which many Koreans households use for cooking or heating, declined 11.9 percent.

As a result, inflation for industrial products dipped 0.6 percent in April, the fourth consecutive monthly decline.

Utility costs including electricity and gas fell 8 percent year-on-year and will likely drop further in May as city gas prices will be lowered 5.6 percent starting this month.

Fresh produce prices have been growing above 9-percent since February, when the rate hit its highest annual growth in more than three years, 9.7 percent. In March produce prices grew the same rate.

Last month, the price of Napa cabbage, which is a popular ingredient in making the Korean staple kimchi, surged 118.3 percent from a year earlier while onion prices grew 70.3 percent, followed by white radish, another popular kimchi ingredient, which went up 66.3 percent. Garlic and scallion prices were up more than 40 percent. Korean beef prices increased 18.1 percent, while crab prices rose 30.4 percent.

The surge of produce prices reflected unusual cold in January while the price of livestock and marine products went up as supplies have shrunk compared to a year ago.

The government said it expects grocery price rises to ease.

“The price of several vegetables including Napa cabbages and onions has been falling since the end of April and will ease more in May,” said Yoo Soo-young, an official at the Ministry of Strategy and Finance’s consumer price policy bureau.

The government expects low inflation rate to approve in coming months as it expects crude prices to eventually rise.

In April crude prices inched up 0.8 percent compared to March. Crude prices have been declining since June 2015.