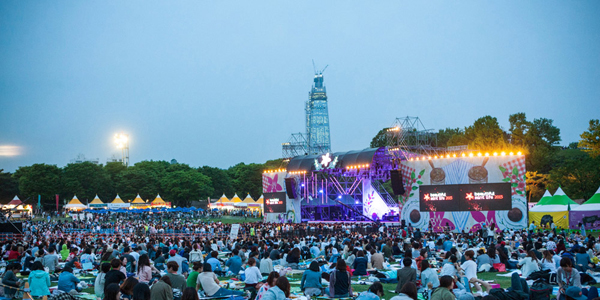 May 21-22: In addition to Guckkasten, No Brain, Rose Motel, Lee Seung-hwan, Crying Nut and Coffee Boy, the festival has released the final lineup, which includes Kim Yun-ah of the band Jaurim and hip-hop stars Dok2, Beenzino and The Quiet.

The festival started in 2010 with the aim of enabling people to share their ideas for making the world a better place; it is also known for being environmentally friendly and inviting lesser-known artists.

May 14-15: Beautiful Mint Life, a festival that welcomes spring in Seoul, is marking its seventh anniversary. It aims to provide people with the opportunity to enjoy a weekend of acoustic sounds.

May 28-29: The Seoul Jazz Festival is famous for inviting top figures in contemporary music, and this year’s lineup is no exception.

Pat Metheny, a jazz musician who has won Grammy Awards in 10 different categories, as well as Go Go Penguin, Dirty Loops, Mark Ronson, Jason Derulo and many others are set to perform.

Hugely popular artists from Korea will be there as well, such as the Peppertones, Hyukoh, Dean, Beenzino, Epitone Project, Jang Beom-june and Eric Nam, to name a few.

June 10-12: Originally from Miami, this electronic music festival is celebrating its fifth year in Seoul.

Unlike in previous years, this time, the festival will run for three days, with 100 acts in the lineup. Star DJs such as Afrojack, Avicii - who helped make electronic dance music mainstream - Axwell, Ingrosso and Martin Garrix are among the acts.

Tickets cost 220,000 won for three-day entry at the advance price.