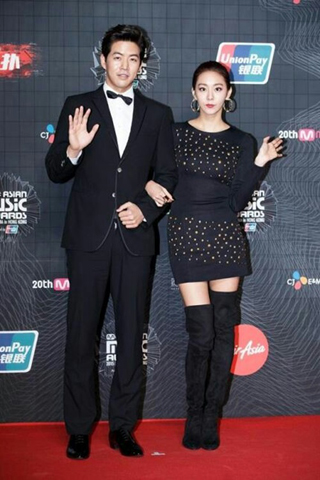 U-ie of the K-pop girl group After School and actor Lee Sang-yun are dating.

Lee’s entertainment agency, J,wide-company, revealed Tuesday that the actor met the singer earlier this year and that their relationship developed into a romantic one. The singer’s agency also confirmed the actor’s claim.

The first official stage where the two encountered each other was at the Mnet Asian Music Awards in December in Hong Kong. The couple shared the stage as award presenters.

Lee, who debuted through a beer commercial in 2004, has made his mark in the drama scene through the hit KBS drama “My Daughter Seo-young” (2012-13). The thriller flick “Insane,” starring the actor, is currently in theaters.

The singer, outside of her career as an idol star, has a significant history as an actress. Her dramas include “Golden Rainbow” (2013-14), “High Society” (2015) and her latest gig, “Marriage Contract,” which just aired on MBC.