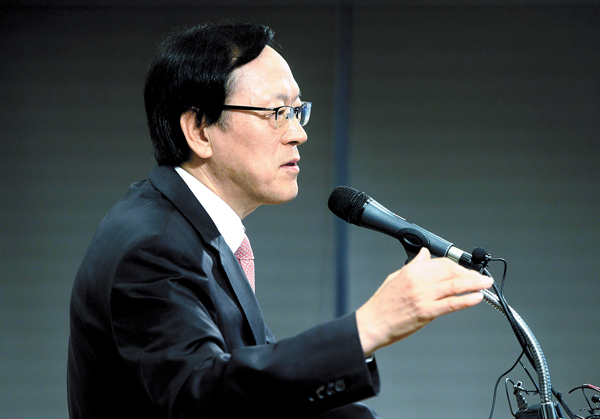 Nonghyup Financial Group will take a “big bath” as soon as it wins a consensus from its parent group, to get rid of bad bonds of struggling businesses, said Chairman Kim Yong-hwan on Tuesday.

At a press conference held to mark the first anniversary of his term, Kim said the company is facing a “tsunami” of bad debt and emphasized the need to restructure the group’s finances at a time when the nation is heading towards massive corporate restructuring sparked by heavy losses in the shipbuilding and shipping industries.

“Streamlining of the soured bonds is an unavoidable job someone has to do,” Kim said. “A big bath is inevitable for better fiscal health.”

In accounting, a “big bath” is an earnings management technique where a one-time loss is taken against income to reduce assets, which results in lower expenses in the future. The write-off removes or reduces the asset from the financial books and results in lower net income for that year. The objective is to take one “big bath” in a single year so future years will show increased net income.

“If we take a big bath for the next two years, we will be able to get rid of all bad debts,” he added.

The chairman said the group is currently investigating all bonds that have a high possibility of turning sour within two years.

“Since we have pretty large corporate borrowers, especially in the five vulnerable industries, new corporate loans won’t be issued for a while,” the chairman said. “Nonghyup is the most exposed to risks stemming from those industries, so the impact of the band debt is going to be like a tsunami.”

The five fragile industries are shipbuilding, shipping, petrochemical, steelmaking and construction, as defined by the Financial Services Commission.

Nonghyup Bank has been suffering declines in net profits since last year. For the first three months of this year, the bank had a 32.2 billion won ($28.1 million) net profit, plunging 64.2 percent from the same period last year.

The chairman highlighted the bank’s efforts to prepare against bigger losses in upcoming years.

“The objective of taking a big bath is to break the vicious cycle of increasing bad debt leading to greater costs and losses for banks,” he said.

At a recent overnight discussion, the chairman and heads of financial subsidiaries urged Nonghyup board members to agree on the need for a “big bath” to overcome the current crisis.

“Many of the members are well aware of the situation, and as early as we reach a consensus, we will take action,” Kim said.

In line with the authority’s guidelines to screen borrowers more thoroughly, Nonghyup has already completed a new set of tighter rules for lending. The bank has expanded the credit examination workforce from 30 staff members to 52 this year. The chairman is also checking the financial books of the bank every day.

“Our goal is to lower the bad bond percentage below 1 percent by 2020, and become a clean bank,” he said.