Learning from the earthquake

Learning from the earthquake 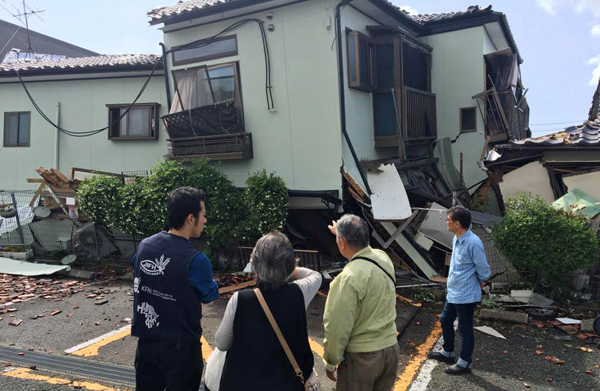 I was on the top floor of an eight-story hotel in Kumamoto, Japan, on the night of April 17. After covering the scene of the second earthquake, I was about to get into bed when NHK reported another earthquake alert. On the previous day, I had experienced a magnitude 7.3 earthquake, followed by over 100 aftershocks. The news of another earthquake scared me. I ran down the stairs to the ground floor, and a series of earthquakes, magnitudes 3 to 4, continued as I caught my breath on the sidewalk.

The next day, I realized how fortunate I was to have been able to evacuate on my own. Mashiki-machi suffered serious damage from the two major earthquakes, and people were sheltered at an elementary school there. Kunio Okada, 86, suffers from Parkinson’s disease and was staying on the second floor. When his family arrived two days ago, there was no space left on the first floor. The school did not have an elevator, so his 55-year-old son had to carry him upstairs. Other old and infirm people were being housed on the second floor as people were placed in the order of their arrival.

A blind couple in their 30s spent two days in the parking lot as their house was destroyed by the first earthquake of magnitude 6.5. While neighbors offered food and support at first, they all left when it started to rain after the second earthquake.

Other people with disabilities had problems even finding resources in the first place. A man with impaired hearing who was in line to receive relief supplies said he barely found his way there as he couldn’t hear the announcements.

Vulnerable people who have trouble evacuating on their own, such as people with disabilities, the elderly and pregnant women, are having an especially hard time in the aftermath of the earthquakes. After the Tohoku earthquake in 2011, the Japanese government revised the Basic Act on Disaster Response in 2013. Local governments are required to list vulnerable people and prepare specific protocol for who will help them and how. Welfare shelters need to be designated so that they can be helped by nurses and social workers. According to a Cabinet Office survey in October 2014, 791 local governments have entered into agreements with 7,647 facilities, including hospitals, nursing homes and welfare centers. The city of Kumamoto designated 176 facilities that can accommodate 1,700 people.

But the manuals did not work properly in the case of actual earthquakes. Japan is known for disaster control and management, but civil servants were flustered when an unexpected second earthquake hit. In the first 10 days, only 104 people checked into welfare shelters in Kumamoto. While there are over 10 million people over the age of 80 in Japan, the system was not prepared to help them. Korea’s Ministry of Public Safety and Security revised the Disaster Relief Act in January, focusing on eliminating blind spots in relief and establishing infrastructure. For people vulnerable to disasters, laws and manuals need to be well drafted. But they are useless if they don’t work when needed. We can learn from the Kumamoto earthquake that thorough preparation and consistent follow-up are critically important.