Naver’s mobile messenger app is a hit across Asia

Naver’s mobile messenger app is a hit across Asia 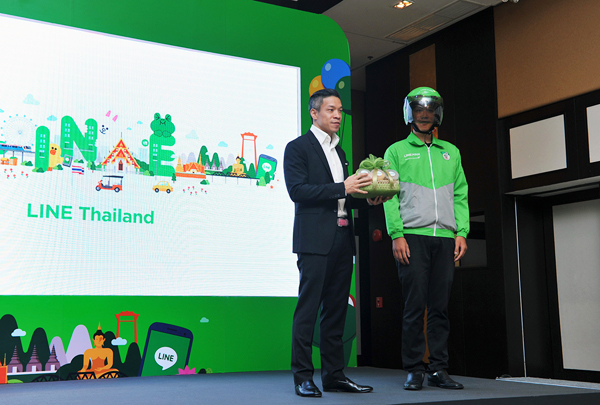 BANGKOK - Thailand, Naver’s mobile messenger app has become the most used in key Asian countries, including Japan, Indonesia and Thailand.

The Korean portal giant’s mobile messaging app LINE launched a service dubbed Lineman in Bangkok to offer delivery service for food and other goods. The service symbolizes the company’s bid to strengthen its footing through country-specific functions.

With its locally-tailored strategy, the Japan-based subsidiary of Naver is beating bigger messaging platforms such as WhatsApp, WeChat and Facebook Messenger.

In Thailand, 33 million people, or 85 percent of smartphone users, have used the app since its launch in March 2014. The Southeast Asian country has the second-largest user base in the world after Japan.

LINE initially focused on adjusting the platform’s major features for the Thai market, but recently, it has introduced exclusive features and services tailored for other countries where it operates. Lineman, launched a week ago, is the first service that is only offered in Thailand.

“Others centralize [their services], but we are localized, since each country has a different culture and user behavior” Ariya Banomyong, managing director of LINE Thailand, said on Tuesday at the Banyan Tree Bangkok hotel. “So, LINE gives us a lot of freedom and authority to run services.”

To promote a locally-tailored approach, LINE workers are encouraged to use the term “culturalization” instead of “localization.”

“We thought the word ‘localization’ itself sounds a bit rude, because it sounds like there is some kind of standard outside of certain regions,” said Shin Jung-ho, chief global officer at LINE. “We are moving to give full authority to local branches from the beginning phase of service development.”

LINE Thailand created a research and development unit in April to recruit Thai developers and create new services and apps that meet the needs of Thai users.

Banomyong hinted that upcoming services will encompass broader fields, including business-to-business solutions, e-commerce and online-to-offline services, and integrate those services under the LINE platform.

“We want our users and businesses to use LINE not just for chatting,” Banomyong said. “We want to offer them useful services for business. We want to be a one-platform to run business.”

But the company indicated that localization will primarily take place in countries where the app has dominance.

“Our direction is to first cement a predominant position in countries where we have a strong base of users and later target other regions,” said Brian Lee, senior director of global communications at LINE.

While LINE does well in markets like Indonesia, Taiwan and Japan, it was not as successful in Korea, the home of its parent company, as well as the United States and European countries.

“We are constantly looking at [the United States and Europe] to see what kind of opportunities we can pursue,” Shin said.

LINE operates in over 230 countries and serves over 200 million users. Its monthly active users are on the rise, though the vast majority of users come from the key Asian countries.

As of the first quarter this year, LINE brought in 218 million users across the globe.