Where the rubber meets the road

Where the rubber meets the road 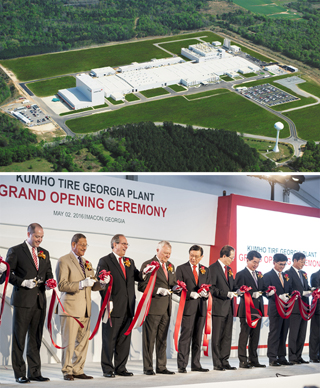 Top: A bird’s-eye view of Kumho Tire’s new U.S. plant in Georgia. Korea’s second-biggest tire producer celebrated on Monday the completion of its third overseas factory. At 80,000 square meters (860,000 square feet), the plant is able to churn out four million tires per year, and the company aims to gradually increase that to as much as 10 million. Production already began earlier this year. The plant mainly produces ultra-high-performance tires and those for wheels larger than 17 inches in diameter. Over 80 percent of its production volume will be shipped to assembly lines belonging to global automakers such as Hyundai Motor, Kia Motors and Chrysler in the United States.

Bottom: Some 300 businessmen and diplomats from Korea and the United States attended the ceremony at the factory on Monday. Attendees included Mayor Robert Reichert of Macon, the city in which the plant is located, Georgia Gov. Nathan Deal and Kumho Asiana Group Chairman Park Sam-koo. [KUMHO TIRE]