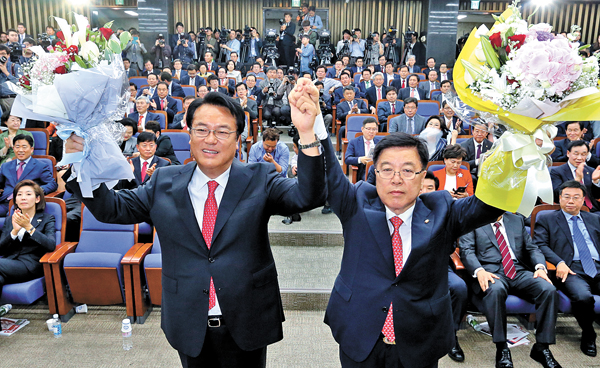 The Saenuri Party on Tuesday elected Rep. Chung Jin-suk, a veteran lawmaker from the Chungcheong region, as its new floor leader.

“The ruling party must play a central role in cooperative politics by consulting with the Blue House and making compromises with the opposition parties,” Chung said in a speech before the vote. “To this end, having trust with the president is crucial.”

Chung also vowed a more “horizontal relationship” with the Blue House, saying the presidential office must no longer pull the strings of the Saenuri Party.

After winning the floor leadership, Chung said he will do his best to prepare the party for the next presidential election. “We have to go through a difficult journey together, and we must show unity,” he said.

Chung, 55, is known for his strong ties to the Chungcheong region. After a career as a newspaper journalist, he entered politics in 1999 by joining the United Liberal Democrats (ULD), a Chungcheong-based political party founded by Kim Jong-pil.

In 2000, he won a legislative seat in Gongju-Yeongi in South Chungcheong, which his father once represented, on a ULD ticket. In 2007, he joined the Grand National Party, the predecessor of the Saenuri Party.

Chung served as senior political affairs secretary in Lee Myung-bak’s administration in 2010. When the ruling party was split over President Lee’s plan to scrap the government relocation to Sejong City, Chung arranged a meeting between Lee and Park Geun-hye, then the chairwoman of the ruling party. Park thoroughly disagreed with Lee’s plan, which was later shot down by his own ruling party at a National Assembly vote.

After serving three terms, Chung failed in a re-election bid in 2012. He stayed in the political arena as a National Assembly administrator and won a fourth term in April. Although a tight race was expected between Chung and Na, he managed to win in the first round on Tuesday. Park loyalists, the largest faction in the Saenuri Party, reportedly supported Chung.

Immediately after winning, Chung took over the acting chairmanship of the party, which suffered a crushing defeat in last month’s general election. Although Chung is not an incumbent lawmaker in the 19th National Assembly, which will end its term on May 29, he will lead the Saenuri Party’s negotiations.

In the 20th National Assembly, Chung will face more difficult negotiations as his party will have lost its majority and been reduced to the second-largest party.

In last month’s election, the conservative Saenuri Party won 122 seats in the 300-member legislature. It is outnumbered by liberals, as the Minjoo Party of Korea won 123 seats, the People’s Party won 38 and the Justice Party won six.

Kim, the new chief policy maker, is a fiscal policy expert who won a third term in April to represent Andong in North Gyeongsang.

After passing the public servants’ exam, he held various posts in economic ministries. From 2003 to 2005, he served as vice minister of finance.

Kim entered politics in 2008 and won his first term in Andong as an independent, later joining the Saenuri Party. In 2012, he headed the party’s think tank, the Yeouido Institute, at the recommendation of Park.

“I will accomplish the politics of unity and mediation based on market principles and pragmatism through communication,” Kim said.