Kim’s leadership is confined to 4 months

Kim’s leadership is confined to 4 months 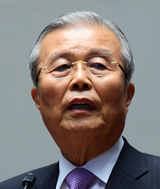 The Minjoo Party Tuesday decided to elect a new leadership in four months, a compromise that will give interim leader Kim Chong-in more time in control.

Acting chairman Kim, the veteran political strategist who led the Minjoo’s victorious general election campaign in April, wanted to remain in power until the end of the year. Allies of the party’s former chairman and presidential frontrunner Moon Jae-in wanted a leadership vote in June or July.

The compromise did little to bridge the schism between Kim and Moon. At the beginning of the meeting, Kim made clear he would surrender the leadership and leave if that’s what the party wants.

“If you are in such a great rush, then I can dismiss this interim leadership at any time and leave,” Kim said. “The election is over, and the party needs to complete its formation for the National Assembly. I think we should at least complete this properly. After that process is completed, I will make preparation so that you can hold the convention at the earliest time.”

Kim also expressed his displeasure with Moon associates for holding him responsible for the party’s defeat in Honam districts in last month’s election. Despite an overwhelming victory in capital districts, the Minjoo suffered a crushing defeat to the People’s Party in its traditional stronghold of Honam region - Gwangju, South and North Jeolla provinces. Of the 28 Honam districts, the Minjoo only won three.

“I came to this party as of Jan. 15,” Kim said. “We have to think back if there ever was a similar case in the country’s political history. The liberals were split, and I was wondering if they could survive in the future. While I was exploring this thought, I was requested to save the party. So I came here to make it a party capable of winning the presidential election.”

“When I came to the Minjoo, I didn’t come to become its chairman,” Kim said. “Honestly, I have no interest at all at the chairman post.”

Kim designed President Park Geun-hye’s winning “economic democracy” campaign platform in 2012 but parted bitterly with her after she took office. Moon, narrowly defeated by Park in that race, invited him to restore the Minjoo Party’s standing before the April 13 general election.

Kim, a former four-term lawmaker who served the Roh Tae-woo administration as senior economic affairs secretary, won his fifth term as a Minjoo proportional representative in the 20th National Assembly.

If none of them win a majority vote, a runoff will be held between the top two contenders.