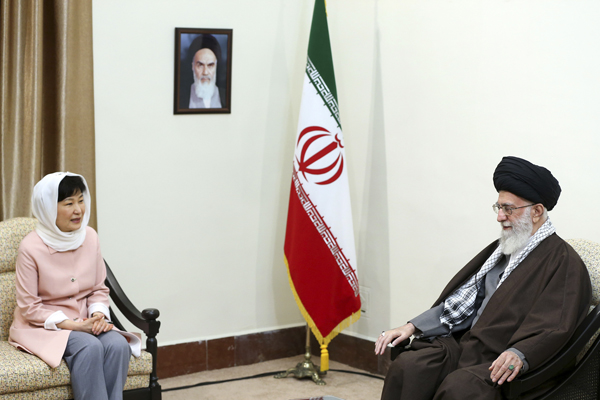 In this picture released by the office of the Iranian supreme leader, Supreme Leader Ayatollah Ali Khamenei, right, meets with South Korean President Park Geun-hye in Tehran on Monday. [AP/NEWSIS]

Kim Kyou-hyun, presidential senior secretary for foreign affairs, said Park met with Khamenei in his office and talked for about 30 minutes on Monday during a three-day state visit to Iran, and relayed the importance of building trust and expanding economic, science and technology, cultural and people-to-people exchanges.

Park described to the supreme leader a 1988 incident in which 13 Koreans working for Daelim Industrial were killed at a construction site in Iran during the Iran-Iraq War.

In late June 1988, Korean workers at a gas refining project in the Kangan region were caught in an air raid conducted by Iraqi forces, and within five minutes, 13 people were killed and some 50 were injured.

Daelim, the first company to enter the Iranian market, completed the gas project even in the midst of war.

Using this example, Park told Khamenei that she hopes the two countries “can look at the long-run and develop relationships based on mutual trust.”

Khamenei emphasized to Park that “if terrorism and other problems destabilizing the region are not resolved, they will become even more difficult to resolve in the future.”

He said he hoped that Iran and Korea could cooperate in order to enable peace and security in the region, according to Kim.

Khamenei has held the position of supreme leader since 1989 and controls Iran’s judiciary, legislature, military and state media.

In May 1989, Khamenei, as president of Iran at the time, visited Pyongyang and held a summit with North Korea’s founding leader, Kim Il Sung, grandfather of current leader Kim Jong-un.

Some analysts say he may have intentionally avoided the North Korean nuclear issue, which was discussed in Park’s talks with Iranian President Hassan Rouhani.

Other experts point out that Park and Khamenei’s meeting in itself sends a message to North Korea.

North Korea and Iran established diplomatic ties in 1973, and relations blossomed in the 1980s. In addition to their shared hostility toward the United States, the two countries are known to have traded missile and nuclear technologies. Pyongyang supported Iranian forces during the Iran-Iraq War (1980-88).

Khamenei met with North Korean Kim Yong-nam, president of the Presidium of the Supreme People’s Assembly, in 2012 in Iran, and said at the time that the two countries have similar positions in many areas. He stressed the importance of not being undermined by pressures, sanctions and threats.

During his Monday meeting with President Park, Khamenei’s official website reported the supreme leader as saying to her, “Relations between Iran and South Korea should not be dependent on sanctions or influenced by the United States,”

Later in the evening, President Park also described the 1988 Daelim deaths to some 1,600 people attending an Iran-Korea cultural event.

“During the Iran-Iraq War, a South Korean company, Daelim Industrial, entered Iran and was working on a construction project, when it was attacked during the war and 13 of its employees were killed,” Park said in her speech. “Despite such a calamity, the company’s employees did not leave Iran and completed the project.”

A Blue House official said the story, which includes events deeply ingrained in the Iranians’ memory, “emphasized that the two countries need trust as a basis to continue to develop relations.”

Daelim Industrial sealed a $5.3 billion contract during Park’s visit to build a railway to connect Al Wajh and Isfahan.

On Tuesday, Park attended an Iran-Korea business forum held in Tehran accompanied by business executives from both countries.

President Park was accompanied on the trip by a delegation of over 230 South Korean business leaders, who also engaged in one-on-one meetings with Iranian companies.