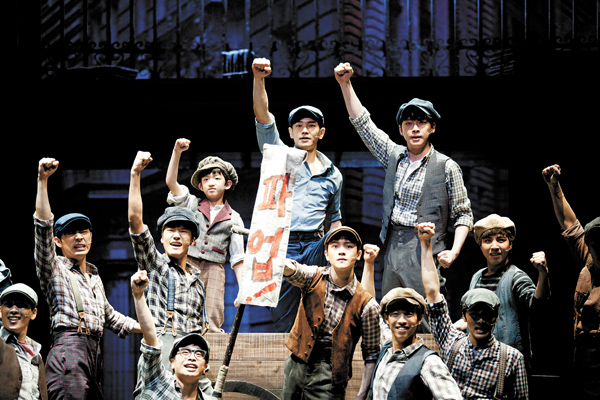 On Joo-wan, center, plays the lead role in the musical “Newsies.” His character, Jack Kelly, is the leader of the newsboys. In 1899 New York City, the young boys confront the capitalists to fight for a better life. On feels the positive energy from the musical that can be shared by the audience as well. [JEON HO-SUNG]

A different type of musical has come to Korea. The Disney musical “Newsies” is having its Asian premiere at Chungmu Art Hall in central Seoul through July 3.

In 1899 in New York City, young newsboys or newspaper-sellers are fighting for better working conditions. It has been over a century since then, but still there are similarities with today’s society.

Although the subject is the conflict between capitalists and laborers, the musical does not end with tragedy. Rather, it gives the audience a message of hope.

Also, the performance featuring 20 men dancing and singing as a group is exciting to watch.

This musical was composed by the legendary Disney composer Alan Menken. With its top-notch music and dance performances, it won Tony Awards in 2012 for Best Original Score and Best Choreography.

At the center of the performers is actor On Joo-wan, for whom this is his stage debut. He is playing the role of Jack Kelly, who is the leader of the newsboys. Even though it is his first musical, he sings and acts with refinement.

However, the preparations were not always easy.

“When I practiced singing like an opera singer, the way of vocalization was different so my face stiffened,” On said. “So instead, I chose to repeatedly sing various soundtrack songs. I was confident in dancing, but I fell down on my face, getting bruises. But I put great effort into practicing, as I am in the front row.”

While Korean musical productions are usually known for their all-star casts, On is an exception to this convention. Nonetheless, he has faith that “Newsies” will be successful with him in the lead. 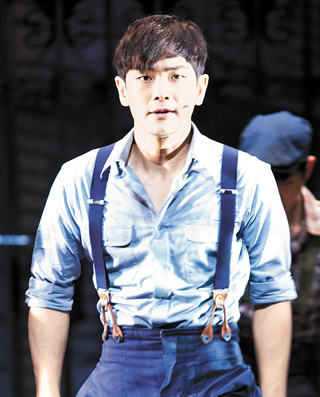 Q. Did you make any mistakes in your first performance on stage?

A. In the last song, I saw the eyes of an audience member in the first row. On stage, you can see the movements of the audience in the first row. Of all the songs, the last song is sung closest to the audience. When I made eye contact, I suddenly could not remember the lyrics. So I hummed the part I forgot. But I think the audience might not have noticed, because I smoothly jumped into humming, unabashed. I think I was relieved at that moment because the musical was almost over.

Do you still feel confident after perceiving the power of the stage?

I still have confidence because I think the power of our newsies is dominant over that of the stage. It is not only me who makes this possible but the combined energy of the cast members. Every time before we go up on stage, we say to each other, “You just believe me, I will believe you, and it is an honor to be with you all.” After this, the fear disappears.

Was it difficult to adjust to the long hours of performing in a musical?

The thickness of the script was actually the most scary. For three hours, the movements, dialogue, dancing, singing and breathing all had to be remembered. I was awe-stricken. However, for two months of practice, I did not complain about how I’m going to do it; instead, I thought of it like meeting friends who are always supporting me. I heard that not all the musicals have this kind of harmony. I believe our team has no flaws. Nobody can defeat those who are having fun.

How do you feel playing a teenager compared to playing adult roles in TV series or movies?

With the newsboys, I naturally become young again. Recently, 80 percent of my thoughts and life are dedicated to “Newsies.” Even though men get older, they are like children in some ways. Thus, if 10 men are together, it seems like we are playing in the same town. We do not have to act to be young; we just become young and bright.

Do you think that the musical’s hopeful message can be applied to today’s society?

Yes, I do think so. In one part of the musical, there is a saying from Roosevelt, which is, “The haves should share their power with the young.” This applies to any generation. If I have something when I’m in my 30s, I should share it with the teens.

In addition, the lyrics of “Santa Fe” touch my heart. The song is about escaping reality and going to other places, but after all, he stays. There are not many people who live by their plan A, but mostly by plan B. Kelly also wants to go to Santa Fe and enjoy life, but he stays to be a newsboy in New York. Nevertheless, if you are together, change always happens whether small or not. I think that’s the very message of the musical.

What do you think is the main attraction of “Newsies”?

The reason I took on this musical is because I felt the energy in it. On the stage, the aim of the dialogue is to present that energy to the audience. The main goal is that after watching the musical, the audience will have the power and live with vitality even when they go to work. I believe there will be someone who gets encouraged. And I will perform to the end, believing in this positive influence.

Do you have any more plans for the stage?

A few days ago, I told the staff and my fellow actors that doing this musical was a mistake. That is, I learned of the happiness of doing musicals. I don’t know what to do in the future. I am too focused on “Newsies.” My life is full of it. I just hope that if the musical is re-released in the future, our team will get together once again. That is how much affection I have for them and for the musical. If the musical is “Newsies,” I will not hesitate to get on stage. If someone says later that On is old to play Jack Kelly, I will be very distressed. I want to hear that regardless of his age, he can play the role. I will always be ready.