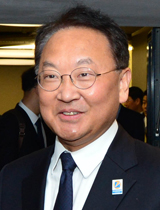 Deputy Prime Minister for the Economy and Finance Minister Yoo Il-ho raised a new possibility of tapping into a supplementary budget to finance the restructuring of the shipbuilding and shipping industries, which is picking up steam after Hanjin Shipping’s self-rescue plan was approved by creditors on Wednesday.

The government and central bank also agreed to come up with detailed plans on how to finance the process by June in the first meeting of a joint task force handling the issue.

“I have the intention of using the supplementary budget if it would reduce the pain the public suffers as a result of corporate restructuring,” Yoo said during a trip to Frankfurt, where the annual Asia Development Bank meeting is being held. “I’m not certain if conditions in creating a supplementary budget will be possible, including convincing opposition party lawmakers. I will be thankful if they accept it.”

Yoo has made a 180-degree turn from his earlier position that it wasn’t the time to consider using a supplementary budget for restructuring.
Wednesday, the Finance Minister said he is open to all options.

His comments came after high-ranking officials from the Ministry of Strategy and Finance, the Bank of Korea, the Financial Services Commission, the Financial Supervisory Service, KDB and Exim Bank held a meeting to discuss raising funds needed for a large-scale restructuring of the industry on Wednesday.

According to the Finance Ministry, the participants agreed that access to both the government’s treasury and injections of liquidity to state-run through the central bank’s right to print money will be considered to finance the restructuring.

“The related institutions have agreed to secure funding for the policy banks as a contingency plan to prepare against possible insecurity in the financial markets in the process of restructuring,” the Finance Ministry said in a press statement. “We will come up with the most effective measure after a comprehensive review of various policy measures from the government and central bank.”

“Fortunately, the BOK has agreed to cooperate and this is a gratifying,” Yim said. “The central bank has always provided the necessary support in every crisis or major restructuring.”

The central bank’s help is important because it can speed up the restructuring process, which is considered critical to its success.
Although the laws related to the central bank would have to be revised if it is to invest in the bonds of state-run institutions like the KDB to create necessary funding, printing money would be easier because it wouldn’t require the approval of the National Assembly.

Currently, the market is estimating that state-run banks will need to have at least 5 trillion won ($4.3 billion) in reserves to fund the restructuring, though that could jump to as much as 10 trillion won.

On the same day Hanjin Shipping received approval on its self-rescue plan but comes with strings attached.

In that time, the company must be able to lower the charter rates it is currently paying to foreign ship owners and persuade bondholders to lower its corporate debt, all while maintaining its global shipping alliance.

If any of these conditions are not met, the agreement will automatically be terminated and the company will be placed under court receivership.

But if Hanjin succeeds, the creditors will fully support the revival of the company by rescheduling its maturing debt or converting that debt to equity, whereby the company’s stocks would be given to creditors that will write off the equivalent amount of debt.