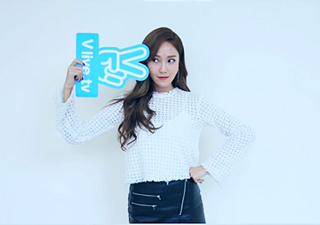 Formerly a member of the K-pop group Girls’ Generation, Jessica will soon greet fans from across the world via her own live-streaming channel.

Jessica established her own channel on Naver’s celebrity live-streaming service, “V,” on Wednesday.

In the promotional video that was unveiled, Jessica holds a sign that reads, “V live tv,” and says, “See you in Jessica V App!”

The singer is scheduled to make a comeback with a song she wrote herself, “Fly,” sometime this month after a nearly year-and-a-half hiatus. It is her first album since she left Girls’ Generation.

The teaser video for her upcoming comeback was released via various channels including YouTube on Monday.

Since her departure from Girls’ Generation last September, Jessica has been showing up at fashion events as a model and designer.

The star preceded her comeback to the music scene by appearing as the host of the TV show “Beauty Bible.”

Committed to the fashion industry, Jessica shared her own fashion tips on the show.