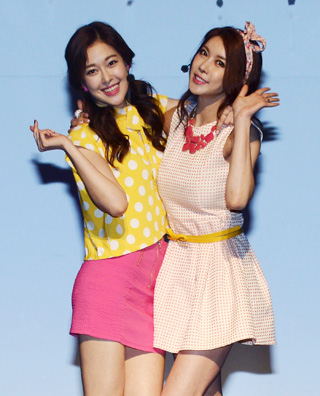 Su-bin, left, and Lani show off their skills at the Korean International College of Art in Apgujeong-dong, southern Seoul, on Tuesday. [NEWSIS]

The newly formed pop duo Red Sun gave a preview Tuesday of their imminent debut and possibly the revival of trot music, an old style of K-pop that was especially popular in the 1950s, ’60s and ’70s.

The female act, made up of Lani, a former member of the modern trot group LPG, and Subin, a former Miss Korea pageant contestant, held a media showcase at the Korean International College of Art in Apgujeong-dong in Gangnam District, southern Seoul.

The group’s name, Red Sun, is taken from a catchphrase first used by the Korean hypnosis expert Kim Young-guk. Kim says the words out loud while inducing hypnosis, and it’s accompanied by a unique hand motion. His TV appearance went viral and the catchphrase gained traction in Korean pop culture.

“Like the name of our group, Red Sun, we will hypnotize the fans,” Su-bin explained.

The showcase started off with a music video of the group’s song “Hot Baby,” one of the two title tracks from the album that was released the next day via music streaming sites.

“Hot Baby” is a mixture of trot and some aspects of modern K-pop sounds. On top of the combined musical style, the group added as the icing on the cake a unique dance move that imitates the so-called Red Sun hand gesture from the viral hypnosis video.

The other title song, “Pang Pang Pang,” followed the “Hot Baby” premiere. The classic upbeat sounds of the ’50s and the repeated lyrics of “Pang Pang Pang” were reminiscent of the trot song “Oh My” released in 2004 by Jang Yoon-jung, who ultimately revived the genre and led to the rise of modern trot acts like Park Hyun-bin and LPG.

“We prepared two songs at once to cater to a variety of fans,” Lani said. “The cute and modern dance of ‘Hot Baby’ may attract fans of the younger generation, while the repeated lyrics and rhythm of ‘Pang Pang Pang’ will catch the ears of the fans in their 30s and 40s.”

The talented duo did not stop there. While Lani put her dancing prowess on display by dancing to “Crazy” by Son Dam-bi, Su-bin exhibited her impressive talent as a balladeer by singing the famous song “Distant Memories of You” by Park Mi-kyung. The two individual performances filled the venue with cheers from the audience.

“Debuting as Red Sun, I am starting from scratch,” Lani said. Though she has experience as a member of a pop group, she looked excited and determined about her new venture.