Gov’t not part of rebuilding: Yim

Gov’t not part of rebuilding: Yim 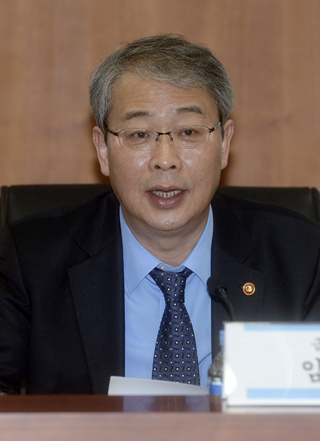 The nation’s top financial authority chief has again stressed the restructuring of the country’s debt-ridden shipbuilding and shipping companies will be handled by creditors and there will be no direct government involvement.

Financial Services Commission (FCC) Chairman Yim Jong-yong said on Wednesday that the creditors have a better understanding of the financial predicament of the distressed companies and its industries and any government involvement could raise international conflicts.

Yim added that the FCC will ask the policy banks, the main creditors of the struggling shipbuilders and shipping companies, to shoulder the burden of the restructuring.

Q. What are your thoughts on the government’s involvement on the restructuring process?

A. The government will not control the restructuring. First, it’s the problem of the company and second, it’s the creditors’ problem. It’s not right for the government to be closely involved.

The government’s role is to create an infrastructure so that the creditors will not face difficulty in executing restructuring. The problem that each company faces should be dealt with by the creditors.

One of the reasons is because creditors are the ones that know well the situation that the company is in and because they are an interest group that owns the corporate bonds of the company. The government makes its judgment through the creditors and does not get a direct briefing on the company or analyze it.

Additionally, the involvement of the government could result in violating international laws. Last year Europe and Japan made direct complaints at the OECD on the policy banks’ plan of financing DSME as a disguised government subsidy.

You’ve talked about the burden of the policy banks. What kind of burden will KDB and Exim Bank share?

We also saw that it was necessary to ask management [to take] responsibility. The Board of Audit and Inspection of Korea has completed their overall investigation and the KDB and Exim Bank will be held accountable corresponding to the investigation results.

You’ve said you will hold management responsible. Are penalties being prepared?

The government can’t question the management misconduct of companies that are privately owned, such as Hyundai Merchant Marines. In the case of Hanjin management, even the largest stakeholders have taken their part in sharing the losses and should be left alone accordingly to the free market principle.

However, in the case of DSME the owner is KDB. And therefore the wrongs made by the management that was placed by KDB should be questioned with clarity. We have reported former DSME CEOs Ko Jae-ho and Nam Sang-tae to the prosecutors’ office.

We have already taken actions against KDB management and some have left the bank. Additional actions will be taken from the audit board. Regarding accusation on [Hanjin Shipping] Chairwoman Choi [Eun-young] of manipulating undisclosed information, we have decided to investigate, instead of Korea Exchange and Financial Supervisory Service, to get to the bottom of it.