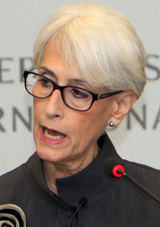 WASHINGTON, D.C. - Wendy Sherman, former undersecretary of state for political affairs - the fourth-highest rank in the U.S. State Department - pressed world powers to begin working on responses to Pyongyang’s possible “collapse,” and said that current discussions on the Communist regime and its future aren’t frank enough.

America’s chief negotiator in the nuclear talks with Iran, Sherman said Tuesday that the status quo on the Korean Peninsula is not sustainable, and that “unexpected changes” might occur.

“China places a high value on stability on the Korean Peninsula,” Sherman said at the JoongAng Ilbo-CSIS Forum in Washington D.C., “and maintaining North Korea as a buffer state on its Northeastern border." Sherman now serves as an advisor to Democratic presidential candidate Hilary Clinton.

“As a result, there has been little discussion with China about how all of the parties - China, the U.S., R.O.K. [South Korea], Japan and Russia - will respond in the event of a sudden collapse of the regime or coup in Pyongyang, a military confrontation resulting from a necessary response to a North Korean attack, or some other scenario,” she said.

While acknowledging that the conversations would be “extremely challenging,” she said that frank discussions would benefit each party in the end because they could lead to more areas of agreement. 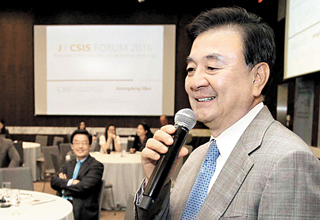 Hong Seok-hyun, chairman of the JoongAng Ilbo and JTBC, gives a closing address at the forum, organized by the JoongAng Ilbo and the Center for Strategic and International Studies, on Tuesday. The event, held in Washington D.C., was the sixth of its kind and security experts from around the world gathered to discuss North Korea’s nuclear arms program, Korean Peninsula affairs and the Korea-U.S. alliance. [KIM SANG-JIN]

Ultimately, Sherman said, the parties have to come to outlines of an agreement collectively.

At one point during her address, Sherman listed some of the key questions that should be answered, which included: What steps would be taken and by whom to secure North Korea’s nuclear weapons facilities and materials? What measures would be taken to manage migrants and refugee issues? How would the Korean Peninsula be governed? Would there be immediate reunification or a period of confederation or some other arrangement? Who would cover the economic costs of reconstruction?

Hong Seok-hyun, former ambassador to the United States and current chairman of the JoongAng Ilbo and JTBC, expressed concerns in his welcoming remarks that the presidential campaign in the U.S. might “complicate” Pyongyang’s denuclearization process, especially when the new American leader may not be on the same page as South Korea.

“The transition poses challenges in terms of implementation of agreements and assurance of continuity,” said Hong.

“We remember the problems that resulted because of a lack of coordination between the Bill Clinton and the George W. Bush administrations on North Korea agreements.”

The former ambassador said Seoul and Washington must make sure they’re in close consultation during this time of change so as to assure cooperation and coordinated measures between the new administrations.

Among the other panelists discussing a variety of issues at the Center for Strategic and International Studies (CSIS) headquarters, Suh Hoon, former deputy director for North Korean intelligence at Seoul’s National Intelligence Service, said that current negotiations with Pyongyang lack a fundamental coherence.

Noting that nuclear bombs for Pyongyang are a means of security and survival, Suh, now a visiting professor of North Korean studies at Ewha Womans University in Seodaemun District, northwestern Seoul, implied it was ironic for world powers to offer the Kim Jong-un regime economic assistance for voluntarily making his country weaker militarily.

“When asking Kim Jong-un to renounce his national security through nuclear weapons,” said Suh, “a different kind of security should be suggested.” Without approaching this key discrepancy, it’s difficult to ever expect North Korea to denuclearize, he added.

Organized by the JoongAng Ilbo and CSIS, an American foreign policy think tank, the sixth annual JoongAng Ilbo-CSIS Forum gathered world experts under the theme “Exploring a New Paradigm on the Korean Peninsula.”

It was the first time the forum was held abroad.