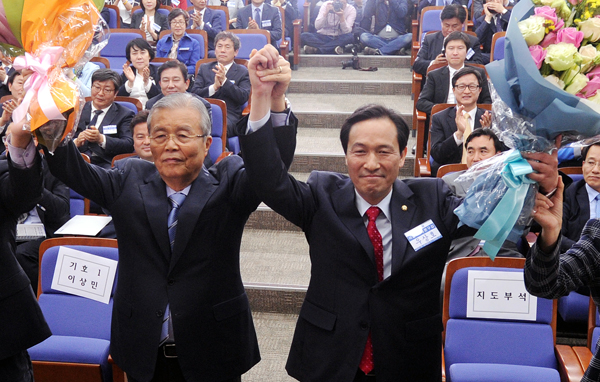 Rep. Woo Sang-ho, right, waves his hands after he was elected as the next floor leader of the Minjoo Party of Korea on Wednesday. Kim Chong-in, Minjoo’s acting chairman, left, celebrated his election. [JOINT PRESS CORP]

The Minjoo Party of Korea elected Rep. Woo Sang-ho as its floor leader Wednesday following its upset victory in the April 13 general election.

As the party’s No. 2 man, Woo will lead the decision-making process of the largest block of lawmakers in the 20th National Assembly, which kicks off on May 31st.

Woo, who won a third term in Seodaemun-A district in Seoul, defeated Rep. Woo Won-shik in a run-off vote at the National Assembly. Woo Sang-ho received 63 votes while Woo Won-shik, who will serve a third term for Seoul’s Nowon district, won 56 votes. One lawmaker-elect abstained in the run-off.

“I will stand shoulder-to-shoulder with all of you to win an assessment (from the public) that the Minjoo Party has truly been transformed by consoling those in hardship and guiding them with new solutions [for better lives],” said Woo in an acceptance speech before lawmakers-elect.

Six contenders ran for the powerful position in the first round of voting, in which Woo Sang-ho garnered 36 votes while Woo Won-shik won 40 votes.

A run-off was called after no one won a majority in the voting of the party’s 123 lawmakers-elect.

The Saenuri Party had been reduced to the second largest block in the 300-seat 20th National Assembly with 122 lawmakers.

With the unexpected outcome of the April 13 general election, the main liberal party will outnumber the main conservative party for the first time in 16 years.

While no single party commands a majority, three liberal parties do.

The new floor leader told reporters after his victory that he would “take a lead in negotiations and steering national affairs in a manner befitting to the Assembly’s largest faction.”

Woo attributed his victory to a support base among first-term lawmakers-elect, whom he said chose a path of reform and change for the party.

Woo is considered a member of the Minjoo’s mainstream faction, which is close or loyal to former party chairman and failed presidential candidate Moon Jae-in. Woo represents a faction within the Minjoo of former university student activists from the 1980s who fought against military strongman Chun Doo Hwan.

One of tasks facing Woo is to unite factions within the party and to reach beyond to other liberal parties. He also has to pave the way for the party’s campaign in the presidential election of December 2017.

The Minjoo’s new chief policy maker will be appointed by Kim Chong-in, its interim leader, who will remain in control of the party until a new leadership is elected in around four months at a national convention, which the Minjoo will host at the end of August or in early September.

Woo, 54, will lead parliamentary consultations with his Saenuri counterpart Chung Jin-suk, who was elected to his post Tuesday, and Rep. Park Jie-won, floor leader of the liberal People’s Party, a veteran lawmaker who won a fourth term last month and was unanimously selected to take the floor leadership.

Rep. Chung of the Saenuri, who won a fourth term in the April 13 election, won an easy victory against two competitors on Tuesday. But Chung faces the difficult task of healing wounds inflicted by an electoral defeat and internal ruptures laid bare in the run-up to the general election over nominations and loyalty to the president.

Drawing from his experience in working with Woo before he left the Minjoo to join the People’s Party, Rep. Park said Woo was a “transparent politician with courage” who would contribute to making the Assembly more productive.