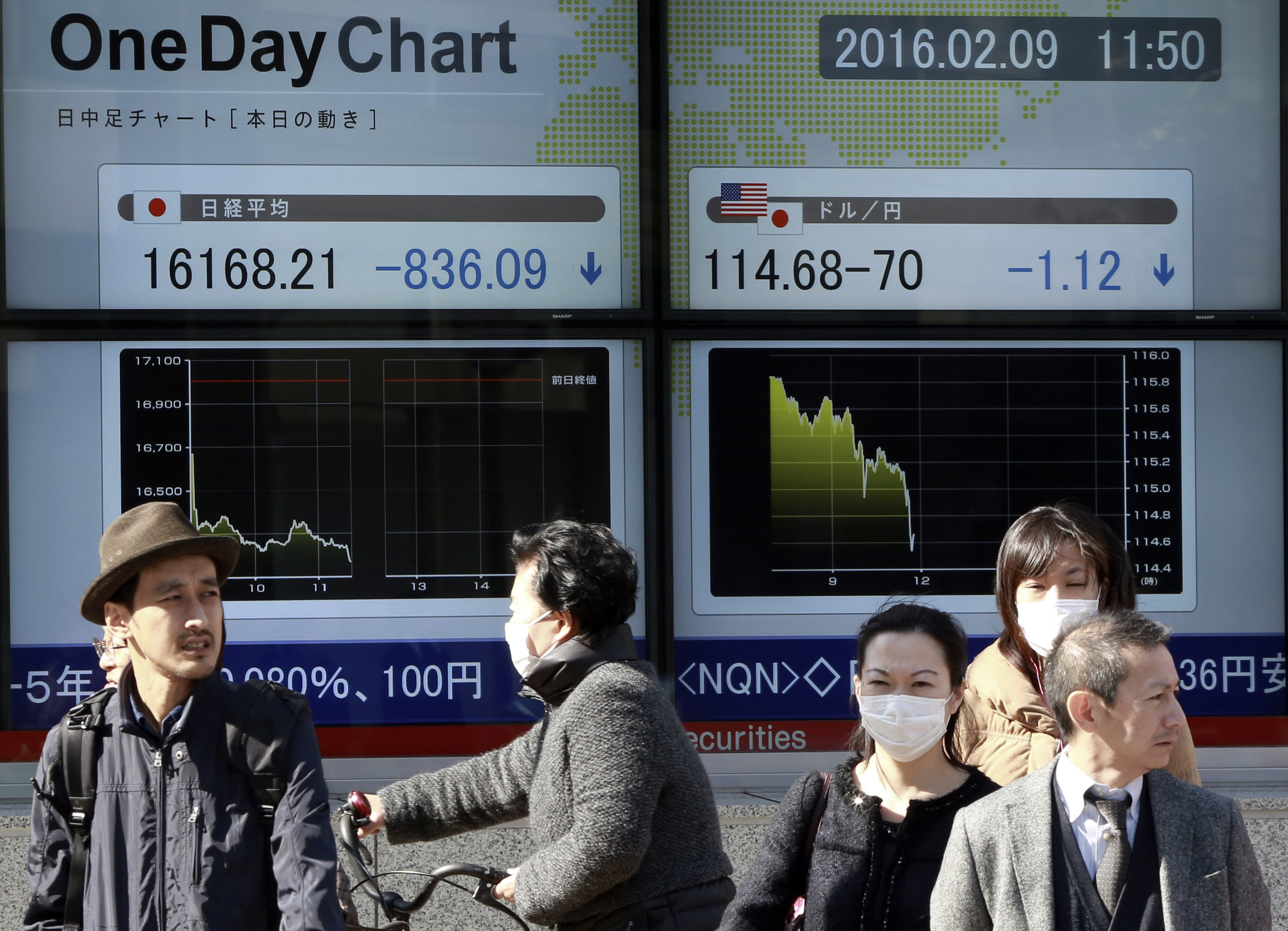 Pedestrians stand in front of an electronic stock board showing Japan’s Nikkei 225, left, at a securities firm in Tokyo, Tuesday, Feb. 9, 2016.

Strolling through Tokyo on a Sunday afternoon, it’s hard to tell Japan’s economy is a mess. Deflation has returned, while growth hasn’t. But Shibuya Crossing remains as packed with diners, bag-toting shoppers and gawking tourists as ever. Nearby, a line of more than 50 people stretches outside a restaurant selling overpriced burgers. Lost decades be damned!

Japan had the good fortune to have become wealthy before entering its years of stagnation. Some Japanese are now suffering in an economy that’s endured four recessions in eight years; the poverty rate has reached 16 percent, its highest level on record. But for many, especially in big cities such as Tokyo, life hasn’t so much deteriorated as frozen in time. GDP per capita, on a nominal basis, is little different now than in 1992. And though the quality of many jobs has waned due to the increase of temporary work, joblessness remains a rarity. The unemployment rate is an enviable 3.2 percent.

The Shibuya crowds raise serious and uncomfortable questions about the direction of Tokyo’s economic policy. Even as some analysts urge the Bank of Japan to double down on its monetary easing program and the government to ramp up its own spending in an effort to boost inflation, there’s a good argument to be made that the approach of Japan’s policymakers has been dead wrong, and for a very long time.
The thrust of Japanese policies since the bursting of its gargantuan asset-price bubble in the early 1990s has been to spur growth with lots and lots of cash, whether from the government or the BOJ. Since 2013, Prime Minister Shinzo Abe has dramatically pumped up that strategy — running large budget deficits, delaying taxes and encouraging the BOJ to print money on an ever grander scale.

Arguably, however, Japan’s main focus should be to preserve the wealth it’s already accumulated. With a population that’s aging and shrinking, Japan can get richer on a per capita basis even if GDP remains perfectly flat. In that sense, deflation — long considered the scourge of Japan’s economy — is actually a boon: Falling prices raise the future value of savings, helping the elderly and others on fixed incomes. In constant terms, Japan’s GDP per capita is 17 percent higher than in 1992, thanks to deflation.

Efforts to stoke inflation, on the other hand, have proven counterproductive. The BOJ’s zero-interest rate strategy, designed to boost investment and prices, has robbed Japanese of an easy way of earning a return on their ample savings. By far the most damaging error has been made by spendthrift politicians. By abusing the fiscal budget to stimulate growth, policymakers have placed a tremendous burden on Japan’s declining population. In 1992, the government’s debt relative to GDP was just above 70 percent; now it stands at 248 percent. That will dump a heavy tax bill on an ever-smaller number of productive workers, eating away at the welfare of future generations and society overall.

None of this is to say that Japan shouldn’t be pursuing GDP growth. The country needs growth in order to create opportunities for younger workers — many of whom are stuck in insecure and poorly paid temp jobs — and to improve incomes.

Easy money, however, is the wrong prescription. Rather than lavish state spending, the economy needs deep reforms: deregulation, opening protected sectors, fixing a distorted labor market and integrating more closely with the rest of the region. That would stir the economy’s potential by encouraging entrepreneurship, improving productivity and attracting foreign investment.

Sadly, little of that reform has been accomplished. In that way, Japan’s riches have been as much bane as boon. The comfortable life many Japanese lead has made them content and reluctant to acceptthe need for drastic change. The Japanese, then, are like the slowly boiling frog that doesn’t realize it is being cooked.

Now, however, a quarter century of bad policy has left the proverbial amphibian pretty thoroughly stewed. The true tragedy of Japan’s misguided economic policy is that it’s achieved almost none of its purpose — increasing growth and prices — even as it’s eroded the nation’s wealth. Buried under so much debt, and deprived of a proper return on their savings, Japanese are likely to be poorer tomorrow than today. They should enjoy those fancy burgers while they can.

*The author is a journalist based in Beijing and author of “Confucius: And the World He Created.”