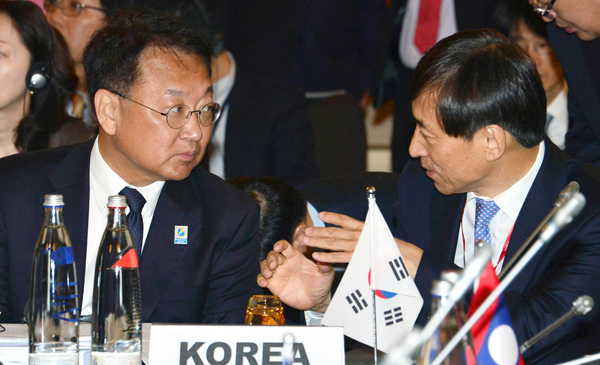 Bank of Korea Gov. Lee Ju-yeol suggested Tuesday that he was not in favor of printing money to allow state-run banks to help companies restructure.

Lee’s comments in Frankfurt shot down calls for a so-called Korean version of quantitative easing. But he said he could join hands with the government to help stimulate the economy with both fiscal and monetary policies.

A day earlier, Deputy Prime Minister for the Economy and Finance Minister Yoo Il-ho said he may consider drawing up a supplementary budget, which Yoo previously was hesitant about.

“There should be logical validity for the central bank to resort to printing money to help out corporate restructurings,” Lee said Tuesday at a press conference held after he attended the Asean+3 Finance Ministers’ and Central Bank Governors’ Meeting in Frankfurt.

“Losses should be minimized when the central bank chooses to directly finance [the policy banks], because the money we use is part of the nation’s resources. That’s why a central bank doesn’t have the authority to allow the possibility of losses. We could finance [the banks] if there is a definite way of recollecting the debt.”

The government has requested the BOK to directly finance two policy banks, the Korea Development Bank (KDB) and the Export-Import Bank of Korea (Korea Eximbank), after printing money. That would be allowed under the BOK Act.

Lee instead suggested that the BOK could lend money to the two policy banks to form a bank recapitalization fund.

Korea’s so-called policy banks - the Bank of Korea, KDB, Industrial Bank of Korea and Korea Eximbank - finance trade and investment, industrial development or restructuring and projects the government wants to invest in. They are supposed to supply capital to risky sectors that commercial banks don’t.

The recapitalization fund is supposed to inject cash into commercial banks, which suffer from low Bank for International Settlements (BIS) capital adequacy ratio due to insolvent borrowers such as the troubled shippers and shipbuilders.

A similar policy was carried out in 2009 to rescue insolvent companies and their lenders after the 2008 Global Financial Crisis. The KDB formed a bank recapitalization fund of 20 trillion won, which consisted of 10 trillion won lent from the BOK and another 10 trillion won financed from retail and institutional investors and the KDB itself.

“This method allows the government to inject capital but not intervene in the banks’ management,” according to the BOK.

Following Lee’s remarks, the Ministry of Strategy and Finance said the government will consider the method if the central bank officially makes such a suggestion.

As the government tries to find a path to corporate restructuring, troubled shipbuilders are coming up with their own self-rescue plans, mostly through downsizing.

Hyundai Heavy Industries on Wednesday announced it will start accepting voluntary retirements from office workers above the manager level on Monday.

The offer may be extended to production workers in the long-term, according to the company. Voluntary retirees will get retirement packages of up to 40 months pay.

The shipbuilder had already shaved off roughly 1,300 workers through a similar offer last year. Since last November, the company has reduced costs by slashing the pay of its executives and ending overtime.

Daewoo Shipbuilding & Marine Engineering (DSME) said it plans to send some 300 offshore plant researchers and engineers from its headquarters in Jung District, central Seoul to its Okpo Dockyard in Geoje, south Gyeongsang, as part of its efforts to cut costs.

Creditors of Hanjin Heavy Industries are reportedly planning to sign the shipbuilder’s self-rescue plan on May 13, according to creditors on Thursday.