It’s the holiday season and the Chinese, Japanese are here

It’s the holiday season and the Chinese, Japanese are here 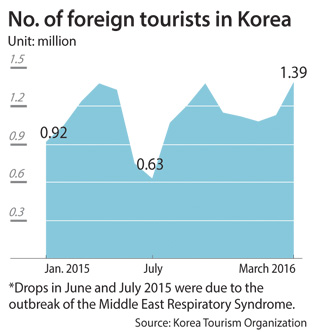 Japan’s Golden Week holiday and China’s Labor Day weekend are upon us, and Korea’s arms are outstretched in welcome for tourists from both nations.

There will be some 150,000 visitors from China and Japan over this long weekend, and they are expected to bring in a tsunami of tourist spending worth more than 100 billion won ($86 million), according to the Korea Tourism Organization on Tuesday.

A big factor in this year’s influx is the wildly popular Korean television drama “Descendants of the Sun,” which has prompted the most ardent fans in neighboring countries to come to Korea. Another factor was the recent earthquakes in southern Japan, which convinced many Chinese to choose Korea over Japan for their holidays.

Korean companies are falling over themselves, rolling out red carpets for the visitors.

About 8,000 workers from a Chinese health care company called Nanjing Joymain Sci & Tech Development Company have been lured to Seoul on an incentive tour arranged by the city government. The group is so big that it has to come in two separate batches.

One batch will be treated to a K-pop concert in Gangnam District featuring several local acts, including the most famous of all, rapper Psy. Both batches are being treated to a meal of samgyetang, a type of Korean chicken soup made with Chinese dates and ginseng, which will be served at Banpo Hangang Park in southern Seoul.

Many local companies want to introduce the tourists to their products in the hope that they will buy more when they return home. Kooksoondang Brewery plans to give out 1,800 bottles of its Baekseju, a traditional Korean wine, and will show off its full lineup at the samgyetang parties, which will be held today and Tuesday.

Samgyetang producers are excited as well. In the past, the Chinese government didn’t allow samgyetang imports. That rule was changed after Chinese Premier Li Keqiang visited Korea earlier this year.

Lotte Duty Free worked very hard to attract business from the Nanjing Joymain group. Lotte said the 8,000 company staffers will stay four nights at 16 different hotels in Seoul. Each will spend 3.3 million won over the four days, or 26 billion won as a whole. Lotte estimated this group alone will have a ripple economic effect of more than 50 billion won.

More than 20,000 tourists came to Lotte’s Hallyu, or Korean Wave, themed concert last month, and they created a ripple effect of 80 billion won.

Those fans get more interested in Korea after going to KCON and either come to Korea in the future or buy Korean goods.

These amounts are similar to those created by selling 40,000 units of Hyundai Motor’s Avante sedan or some 920,000 Samsung Galaxy S5 smartphones.

The Korean Wave has created more growth in the services sector as well, particularly in jobs.

Services are labor-intensive. The employment-to-revenue ratio for restaurants and hospitality is 26.6, and for the cultural services sector, it is 22.3, according to the Bank of Korea. That is very large compared to the 3.2 ratio for semiconductors and 8.8 for the auto industry. (The ratio indicates the number of employees added after sales of 1 billion won is created.)

More than 3.6 million foreigners visited Korea in the first quarter of this year, up 12 percent from 3.21 million last year.

A big challenge for Korea is that its tourism infrastructure is not growing fast enough to meet demand. Korea ranked 29th on the World Economic Forum’s travel and tourism competitiveness index for 2015, which was lower than Malaysia’s 25.

The Korean government’s policies on tourism ranked 82nd, and tourism infrastructure was a middling 40. Data from 2014 showed that only 34.9 percent of foreign tourists revisit Korea.

The government’s U-turn on its duty-free shop policy shows it is reacting to criticism.

But last month, the government announced that it will add six more duty-free shops, including four in Seoul, as Chinese tourists pour into country. Although the government has not named the three operators of the new shops, Lotte and SK are confident they will be selected.

Some tour packages that have included visits to the stores that are closing will be affected. Lotte’s Jamsil duty-free shop was included in a number of packages that take tourists around the Gangnam area, which attracted 1.2 million foreign tourists last year alone.

“Chinese prefer Gangnam over Myeong-dong,” a Chinese tourist in his 30s said. “Lotte’s duty-free shop has a large number of premium brands, and we believe it is the No. 1 duty-free shop.”

Seo Yong-gu, a business management professor at Sookmyung Women’s University, said Korea’s services industry needs to grow. “Tourism, services and retail are closely related, and we need to find ways to improve them.”