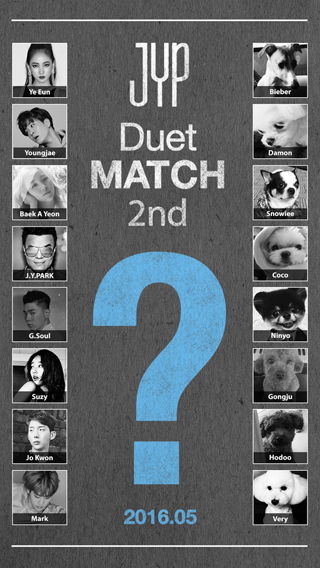 JYP Entertainment, one of Korea’s top three entertainment companies, made a surprise announcement on Thursday about its upcoming plan to release a second duet project, though who will participate has yet to be revealed.

In April, the music agency released a duet sung by Korean-American singer Bernard Park and Hyerim of Wonder Girls, both of whom are the agency’s affiliated artists. The harmonious pairing received positive feedback.

JYP Entertainment uploaded a teaser poster for the second project on its social media account on Thursday at midnight, with the slogan “JYP Duet MATCH 2nd.” The poster also included photos of eight JYP artists on the left side, including JY Park, Suzy, Jo Kwon and Ye Eun, among others.

On the right side of the poster were the photos of eight dogs that belonged to the artists, suggesting that the collaboration will be done between the artists and their pets.

The second duet will be released sometime in May.