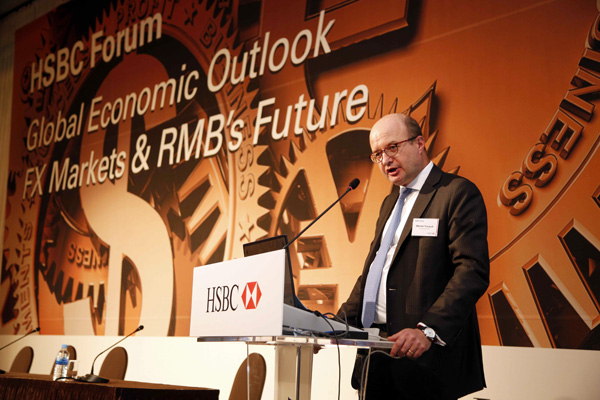 Seoul will become a renminbi hub in the future, and the internationalization of the Chinese currency and stabilizing Beijing economy will help Korea stay strong despite recent hardships, the CEO of HSBC Korea said on Tuesday.

HSBC Korea held a forum on Tuesday in central Seoul to discuss the future of the renminbi and its impact on the foreign exchange (FX) market and Korea. Some 300 corporate and institutional clients, as well as government officials, attended.

“Korea is fast becoming a key player in the internationalization of the renminbi [RMB],” said Martin Tricaud, president and CEO of HSBC Korea, in his opening remarks.

“The Korean government issued the first sovereign Panda Bond in China, and there is an initiative to establish a won-RMB trading market in China,” he said. “We remain optimistic that Seoul will become a leading offshore RMB hub.”

Regarding the Korean economy, Tricaud said, “Korea has everything it needs to keep up with the momentum, as it will address its structural problems.” He added that the country’s economy has stable fundamentals and favorable external conditions, including the stabilizing Chinese economy and strengthening of other Asian currencies.

The position of the yuan was elevated in Korea after the won-RMB direct trading market first opened in Korea at the end of 2014 to meet the growing number of trade transactions between Seoul and Beijing.

Direct trading has increased gradually as the Korean government shaved off FX brokerage and trading charges specifically on the yuan.

Daily transaction volume in the won-RMB market nearly tripled in the first year of opening, from $880 million in daily trading in December 2014 to $2.54 billion at the end of last year, according to the local financial industry.

The Korean central bank has forecast that the coupling between the Chinese and Korean currencies is expected to grow as more local exporters choose to pay directly via RMB.

HSBC Securities Korea got involved when the Korean government first issued yuan-denominated sovereign bonds worth 3 billion yuan ($460 million) in China at the end of 2015, and acted as the sole manager for the first RMB Kimchi bond.

Another direct trading market between the two currencies is slated to open next month in Shanghai.