Jeonju shines on the big screen

Jeonju shines on the big screen 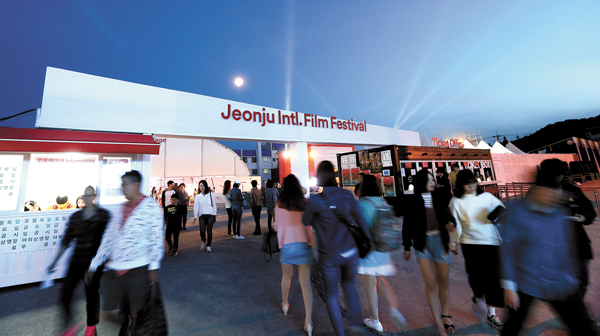 As well as more movie presentations and screening time slots with newly established theaters, the festival recorded the largest number of sellouts for 106 screenings during the first four days, the highest ever.

However, what stood out the most this year was the exemplary management of the festival with regard to respecting its independence and diversity. Among 211 films invited from 45 countries, there were a number of controversial features that included critical views toward the current leadership. Regardless, the festival went ahead with screenings.

The festival also made a meaningful foray into making the event more appealing to a wider audience. Outdoor screenings had more publicly appealing films such as Lee Joon-ik’s “Dongju: The Portrait of a Poet,” which was a sellout. The festival also held special programs where the audience could directly interact with acclaimed and popular filmmakers.

Controversy in the limelight

Screening politically charged documentaries can bring about severe consequences, as extreme as putting the life of a festival at stake, as shown in the currently beleaguered Busan International Film Festival.

However, against all odds, this year’s Jeonju International Film Festival (JIFF) provided visitors with lots of opportunities to watch diverse documentaries that touched on sensitive political issues.

“Spy Nation,” a documentary that reveals the flaws and deceitfulness of the National Intelligence Service (NIS) was arguably the most talked-about documentary of all.

The film was directed by Choi Seung-ho, a producer with Internet news provider Newstapa who was dismissed from MBC in 2012.

The 90-minute documentary closely follows the case of Yu Woo-sung, an ethnic Chinese who defected to South Korea from the North.

While he was living as a faithful civil servant, he was suddenly put on trial on espionage charges in 2013, based on testimony from his younger sister that later turned out to be false.

The younger sister publicly said her testimony was a false confession forced out of her by the NIS through harsh violence and detention.

However, the NIS fabricated the evidence to make Yu guilty, such as making up immigration records showing he had been to North Korea twice, which director Choi details in his documentary.

Another feature that criticizes the nation’s current leadership was a documentary titled “Seven Years ? Journalism without Journalist,” directed by Kim Jin-hyuk, a producer at education-oriented channel EBS.

The film questions the duty and responsibility of journalists, which cannot be thoroughly achieved in the current media environment heavily influenced by a political agenda. “Seven Years” follows 17 journalists who have been laid off for going against the authority.

These documentaries have been under the limelight ever since the lineup was revealed.

However, Kim Seung-soo, the mayor of Jeonju as well as the festival’s chairman, emphasized the importance of “freedom of expression.”

“A festival should be an open space where people can talk about things that they cannot talk about otherwise, and people have the right to enjoy this virtue,” Kim said. “That is the essence of a film festival, and we are going to firmly defend it in the future.” 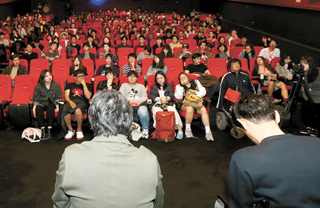 One of the programs was attended by Park Chan-wook, where he talked about film as well as his life as a director. [JEONJU INTERNATIONAL FILM FESTIVAL]


An important objective of this year’s JIFF was to cater to a more diverse audience.

JIFF has been perceived as a film festival only for industry insiders because of its distinct focus on independent and art-house cinema.

However, since organizers pledged at a press conference in March to make it more open, many attempts to lure a wider audience could be spotted in the festival’s special programs.

The Guest Visit sessions, where directors and actors go on stage after a film finishes to discuss it with the audience, was a rare opportunity for ordinary moviegoers to interact with the stars.

Among them was actor Ahn Jae-hong’s directorial debut, “A Day in the Black Hole,” where a Guest Visit session was held on April 29.

Fans of Ahn poured out questions regarding the movie as well as Ahn’s personal life.

“I came all the way from Seoul to get a glimpse of Ahn,” said Kim Su-jin, who studies acting at Gachon University. “It was thrilling to see him in person as well as hear what his thoughts were when making a movie.

“It was a joyful experience, and I have more Guest Visit sessions to attend until tomorrow,” she said.

Another popular section was a Cinema Class where acclaimed filmmaker Park Chan-wook talked about a documentary “Old Days,” which depicted the behind-the-scenes story of Park’s 2003 masterpiece thriller “Oldboy.”

Aspiring young filmmakers and reporters filled the seats. In addition to reminiscing about the old days, the award-winning director also gave practical advice to students about the virtues of being a good director.

“A director should be like a conductor of an orchestra,” he said. “Even if an audience leaves the hall answering phone calls, you should stay undisturbed, leading the unit firmly, in silence.” 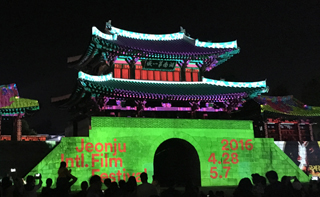 Pungnammun in Jeonju will light up with colorful beams of light for one hour from 9 p.m. every day until Saturday. [JEONJU INTERNATIONAL FILM FESTIVAL]

All the ingredients for a party

It couldn’t have been a festival without some music and beer.

In line with the festival’s main identity, JIFF’s main neighborhood area was peppered with charming street performances and midsize outdoor concerts and parties.

Well-known indie bands such as Daybreak, Okdal and Soran took to the stage every night during the weekend, attracting hundreds of music fans. Okdal’s performance was enjoyed by some 1,000 people, according to festival organizers.

Another not-to-be-missed event was the Audience Party, where members of the audience could mingle with performers and talk to celebrities.

Attendees were also given a can of free beer.

Even those who were not visiting JIFF could join the festive mood.

“I was visiting the Hanok Village in Jeonju, and I didn’t even know there was a movie festival going on here,” said Park Sang-jin, 42, who was at the event with his wife. “I was just taking a stroll and saw the sign for the event. I really enjoyed it. Maybe next time, I will visit Jeonju to enjoy this festival.”

There were other options for visitors who could not get a ticket for one of the music events.

One of the most attention-grabbing events was a media facade show at Pungnammun, a gate to a fortress from the Joseon Dynasty (1392-1910). Collaborating with Jeonju-based media art lab Interactiv 30DAYs, the gate was illuminated with colorful beams of light and musical scores. It will run each night until Saturday from 9 p.m. to 10 p.m.

The closing ceremony, attended by director Ryoo, has been revived for the first time in three years to help give a memorable finale to the festival.