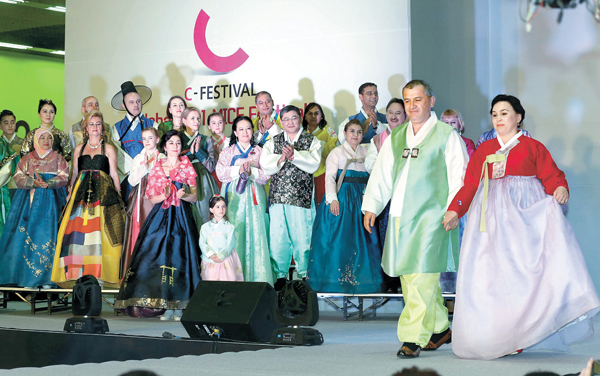 Foreign diplomats and their families join a fashion show promoting hanbok, or traditional Korean clothing, at the C-Festival at COEX in Gangnam District, southern Seoul, on Wednesday. The festival will offer a wide variety of cultural activities through Sunday. [KIM SANG-SEON]

With a rare four-day holiday weekend at hand, Seoul is putting on two major festivals that highlight the diversity of culture that can be found throughout the city.

The C-Festival at COEX in Gangnam District, southern Seoul, will offer a variety of activities through Sunday, inviting visitors to enjoy live music, a photo exhibition, cooking classes, baseball games, a beer festival, pastries from around the world and a mini-amusement park, among other options.

Organizers predict the festival, which kicked off Wednesday, will attract 1.5 million people in total and at least 150,000 foreigners.

A craft beer festival, which runs every day through Sunday from 1 p.m. to 10 p.m., will feature live music, balloon art and food outdoors, drawing crowds to sample tastes from breweries including Babarosa, Gorilla Brewery, Kabrew, Platinum and Playground Brewery. Admission is charged.

At another zone titled “Art Toy Culture,” open until Sunday from 10 a.m. to 7 p.m., both children and adults can check out various designer toys and figurines. Discounts on tickets are available online.

A cocktail class teaching visitors how to make two different kinds of cocktails will be available through Saturday for three 10-person teams each day. For registration, call 02-6002-2003 or 02-6002-2004.

On Sunday, the festival will wrap up toward midnight with a K-pop concert featuring star-studded singers including Psy, iKon and Winner on Yeongdong-daero, just next to COEX. The concert starts at 7 p.m. and is free to attend. For more information about the festival, call 02-6000-8122 or 02-6000-8120, or visit the festival website at www.c-festival.com.

Up in the northern part of the capital, the Seoul Friendship Fair 2016 will run over the weekend at Seoul Plaza near the third exit of City Hall Station on subway lines No. 1 and 2.

One of the largest multicultural festivals in Korea, this year’s show will entertain visitors with cultural performances from people representing 15 of Seoul’s sister cities across the globe, a music zone featuring the traditional sounds of different countries, a food fair serving the best dishes of 50 nations and a tourism booth providing information on worldwide travel.

Special events will include a global traditional costume fashion show on Saturday at 4 p.m. and a flash mob of people dressed in hanbok (Korean traditional clothing) on Sunday at 12 p.m.

For more information about the Seoul Friendship Fair 2016, call 02-2133-5259 or visit www.seoulfriendshipfair.org.