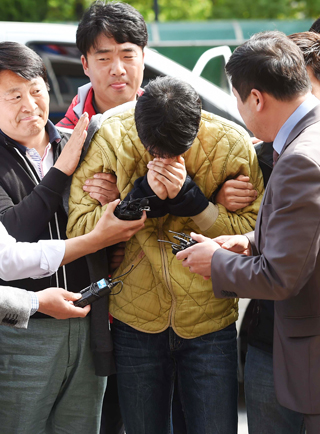 The suspect in the killing of a man whose remains were found in Ansan, Gyeonggi, is transported to Ansan Police Precinct on Thursday after police arrested him in the victim’s home. [NEWSIS]

Police on Thursday arrested a suspect on charges of killing and cutting a man in half after discovering him in the victim’s home.

The suspect, who discarded the two halves of his victim in different parts of Ansan, Gyeonggi, is a 30-year-old man surnamed Cho, and was found in the victim’s house in Yeonsu District of Incheon on Thursday. He faces possible charges of murder and damaging and abandoning a corpse.

As the victim had been out of touch with his family for five years, authorities did not know where he lived and instead made use of his call records, by which they were able to locate his address and find Cho, who had lived with the victim.

When questioned about bloodstains on the walls of the house, Cho admitted to killing the victim, a 40-year-old man surnamed Choi, with a kitchen knife. Cho told police he committed the grisly crime between late March and early April.

“We were in an argument when I accidentally killed him,” Cho told police. “Choi would often ignore me or make me clean the house because I am 10 years younger than him.”

Cho said he spent 12 days bisecting Choi’s body in half in the bathroom. On April 26, Cho rented a car, drove the bisected corpse to Ansan and discarded it in two locations on Daebu Island.

Choi’s autopsy revealed a fractured skull and rib, and damages to his right arm and right lung due to multiple stabs with a sharp weapon. A head injury, inflicted by an external force, was likely the cause of death.