Can markets save the North?

Can markets save the North? 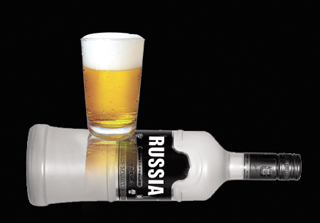 Something unbelievable has happened in Russia. Russians are finally winning their long battle with the notorious habit of binge-drinking on vodka. Consumption of vodka in Russia fell 12 percent in 2014 alone. That year, Russians drank just half of what they had guzzled down in 1995.

Instead, beer consumption grew. In 1995, vodka was the favorite drink for 78 percent of Russians, while just 20 percent liked beer. By 2007, the numbers reversed. Beer was the favorite for 79 percent and vodka for 13 percent. The average consumption reflecting the percentage of alcohol decreased as Russians shifted to the lower-proof beverage. Less binge-drinking on vodka, which is believed to be responsible for a quarter of deaths among Russian men below the age of 55, is expected to reduce the mortality rate by 30 percent.

Vodka traditionally has been a symbol of masculinity for Russians. There is a legend that a Russian king in the Middle Ages rejected Islam because the religion prohibited alcohol. President Mikhail Gorbachev in 1985 tried to rein in the nation’s habit of hard drinking, believing it to be the cause of economic depression. He shut down vodka factories and raised vodka prices. Alcohol consumption was cut in half, according to official data.

But unofficial data showed that sugar consumption doubled from the previous year because Russians secretly manufactured the spirit and sold it on the black market. How did Russians break a habit that even a king had supported and a socialist regime could not control?
Russians were able to shake off their long-held partiality to the drink because of the market economy. The opportunity cost of heavy drinking became dire after Russia shifted to a free-market system in 1992. In a socialist economy where jobs were secured for life for everyone, people were able to guzzle down a drink or two in broad daylight. Heavy drinkers were paid the same as non-drinkers. They did not worry about being fired for their drinking habit. In fact, drinkers were regarded as sociable and having a better chance of moving up in the hierarchy. That ended when market principles were applied. Drinkers lost jobs and income and were deemed impotent. Young Russians prefer Baltika (the best-selling Russian beer brand) over vodka during their nights out.

The market system can fundamentally change human minds and behavior. German socialist Max Weber was one of the first scholars to analyze the phenomenon of modernity. The vertical relationship of man to God that prevailed in the Middle Ages was being replaced by a network of horizontal relationships between individuals and their social environment. In a vertical society, loyalty to the almighty can shape one’s fate. But in a market system, one who comes up with a product that sells well can succeed.

Scottish philosopher Adam Smith perceived capitalism as a merchant-oriented society where every person “lives by exchanging, or becomes in some measure a merchant, and the society itself grows to be what is properly a commercial society.” The French philosopher Montesquieu described the “spirit of commerce” as a positive force that, when properly exercised, could lead to “frugality, economy, moderation, labor, prudence, tranquility, order and rule.” He believed commerce produces in the mind of a man a certain sense of justice, competition, independence and responsibility, while a lack of it can lead to evils like robbery. The market can transform a rigidly Juche (self-reliant) North Korean to a “homo economicus, or economic man.”

According to a Seoul National University study, a North Korean with market experience supports capitalism more than one who has none, although still less than a South Korean. A North Korean defector relayed an interesting story from home. A teenager who got accepted to a top elite school in North Korea said in an interview that he was able to get into the school all thanks to his parents and did not mention North Korean leader Kim Jong-un. The school canceled his admission, but people silently agreed that it had been the parents who earned money from their market activities to educate their son, not the supreme leader.

North Korea convened its Workers’ Party congress on Friday for the first time in 36 years. The politburo’s top boss, Kim Jong-un, is expected to proclaim to the people at home and abroad that the country has achieved its goal of becoming a military and economic power. But a country with per capita income of a paltry $800 can hardly be defined as an economic power. Kim is in a bind. If he promotes the market system, his feeble hold over the country will crumble. But if he tries to clamp down on market activities that account for more than 70 percent of income for North Koreans and reinforce a state-controlled economy, he will inevitably face strong resistance from the people and risk a major economic breakdown.

An economy moves on its structure, not the words of a leader. No grandiose promises or ambitious plans helped stop the collapse of the Soviet Union. No policy other than a shift to a market economy can save the North Korean economy. While cheering for the delegates in carefully choreographed pageantry, the minds of North Koreans will be at the market eager to make money off of the crowd. It is the market that is moving today’s North Korea. What commands the North Korean economy is the market — not Kim Jong-un. We will have to see whether the market that cured the Russians of their centuries-old vodka addiction can work miracles for Kim Jong-un in his obsession with nuclear weapons.