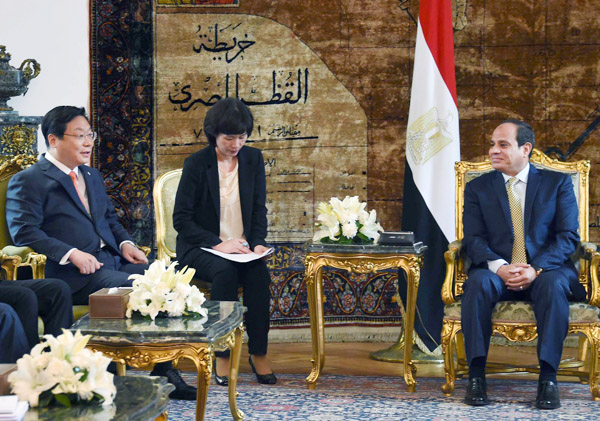 Joo met with Egyptian President Abdel-Fattah el-Sisi and Minster of Trade and Industry Tarek Kabil and agreed to improve issues such as currency that are holding local companies back from entering the new market.

“Trade Minister Joo requested cooperation from the Egyptian government, which said it will solve the currency problem by this month,” Choi Jin-hyuk, a director at the Ministry of Trade, Industry and Energy, said in a press release on Friday.

Currently, Korean companies are interested in contracts for a number of projects, such as line No. 5 of the Cairo Metro and seawater desalination installations.

The Trade Ministry held a business forum and one-on-one seminar on Thursday at the JW Marriot Hotel in Cairo. The forum was attended by some 200 businesspeople from both countries, and panel discussions were held on the Suez Economic and Trade Cooperation Zone and renewable energies.

“Cooperation in the energy sector, expanding trade volume and cultural exchange are the top three criteria that the two countries should work on for a long period of time in order to improve the two countries’ economic relationship,” said Joo at the conference.

This was the second time Joo and Kabil have met and they agreed on holding a business forum and a ministerial economic conference every year.

According to the Trade Ministry, this was by far the largest Korean business group that has visited Egypt.

Korean automobiles account for 40 percent of the market share in Egypt, and 80 percent of vehicles operating in the country are old or registered before 2000. The ministry said one company that manufactures auto parts signed a $5.5 million export deal with two Egyptian companies.