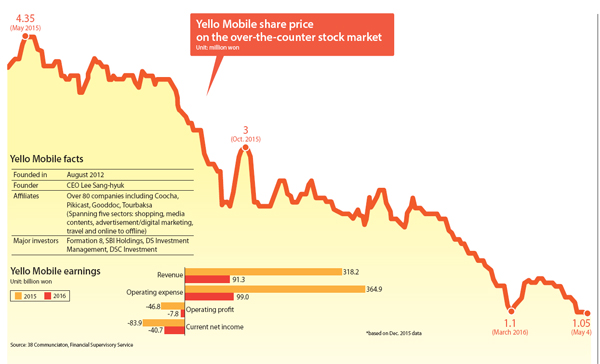 Investors are wondering whether Korean start-up Yello Mobile is full of potential or merely a bubble waiting to burst.

Last December, Forbes valued Yello Mobile at $4 billion and ranked the start-up’s CEO, Lee Sang-hyuk, at No. 34 on its list of Korean billionaires.

With the valuation, Lee’s 26 percent stake in the company was purportedly worth over 1.2 trillion won ($1 billion).

But compared to the company’s size, its profits are lacking.

Yello Mobile is a platform for digital businesses, which means it acquires many other start-ups and then monetizes their services.

Affiliates share revenue and operating profits with Yello Mobile but are allowed to run independently.

The strategy has proven effective in growing the size of the business at a rapid pace. It has over 80 affiliated start-ups mostly focused on media, shopping and entertainment.

But Yello Mobile’s operating losses have snowballed over the last few years, as the apps in its portfolio aren’t particularly profitable.

In 2015, the company recorded 46.8 billion won in losses, six times those seen a year earlier.

Major losses were incurred from massive advertising and marketing costs for the content-curating app Pikicast and shopping app Coocha.

The share prices of Yello Mobile, traded in the Korean over-the-counter stock market, soared to as much as 4.35 million won in May last year but tumbled to below 1.1 million won last month.

As the company is operating under a deficit, Yello Mobile started financing its business by issuing convertible bonds from the end of last year.

By the nature of convertible bonds, if the creditor decides not to convert their holding bonds to shares of Yello Mobile as its value deteriorates, the company has to pay back a sum of fixed interest and principal on the matured bond to its creditors. 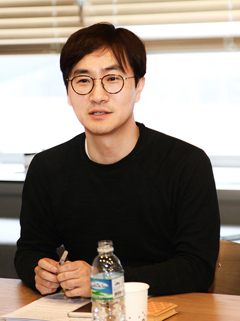 Formation 8, a venture capital firm from the U.S. Silicon Valley, and investors from Japan and China have purchased the bonds so far.

“Our operating profits turned to a surplus from the fourth quarter of last year, and we expect our performance to improve as we build internal stability this year,” said Yello Mobile CFO Lee Sang-hoon.

“Convertible bonds are a way of attracting investment also utilized by Uber and Tesla, and investments are from those who have confidence in our future businesses.”

Still, creating collaborative synergies between affiliated partners is another problem the company has yet to solve.

Some affiliates are unhappy with how money is being used by the mother company. Only two of its flagship apps received big funding, and other affiliates are saying the way marketing costs are distributed is unfair.

There have also been communication problems between affiliates and the mother company, with some saying they lack up-to-date information on each other’s businesses.

In response, Yello Mobile has recently reformed its organizational structure and set up a new “Future Strategy Team” and “Business Innovation Team” to better cater to the needs of the makers of its apps. It also hosted a gathering of all affiliate heads on April 26.

Whatever happens with Yello Mobile, which employs 4,000 people, is expected to have a big ripple effect on the overall start-up ecosystem.

“A roll-up venture company, which enhances the value of the company by rapidly growing the company’s size, is still an unfamiliar model in Korea, but I’ve seen some global companies trying it out,” said CEO Lee Han-joo of SparkLabs, a Korea-based start-up accelerator. “If it has great potential for future growth, operating losses are not a big problem for now.”

But according to an insider in the start-up industry, “I’ve talked with foreign investors who met Yello Mobile, and their overall response was that the business model was quite fresh but lacked the reliability they needed in order to invest.”

“The outcome must be tangible in numbers,” said Lim Jung-wook, managing director at Startup Alliance Korea. “We’re looking into whether Yello Mobile will come up with a solution to make synergy out of its numerous affiliates.”

Yello Mobile had proposed plans to list the company on the Kosdaq market over a year ago, but recently shifted its stance to listing its affiliated companies first. It is currently processing the listing of FuturestreamNetworks, a mobile advertisement network. As a result, industry insiders expect Yello Mobile’s own listing will be further delayed.

Still, other companies are following Yello Mobile’s business model. One is 500V, which started operating last year and has gathered 26 start-ups thus far.