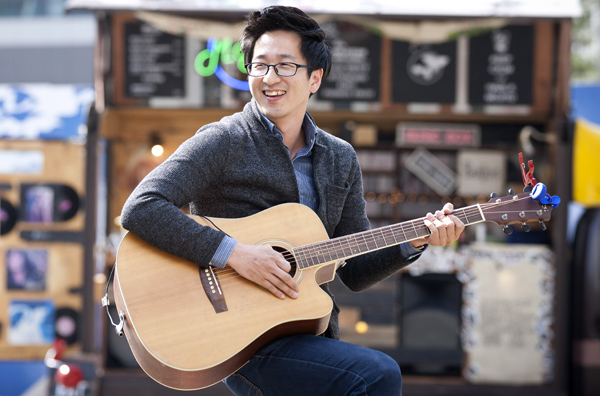 Songdo Central Park in Incheon became filled one early April afternoon with music coming from a truck that had been remodeled into a retro bar, where people stood outside taking a moment to relax and enjoy the music with a few drinks.

Kim Jin-seok, 31, the owner of the truck as well as the head of Premium Weather, which manages several other trucks, has been running the Rain Cocktail Bar since June 2013.

The business consists of Kim’s cocktail truck and two more trucks, Manhattan Hotdog and Napoli Pizza, both of which are run by Choi Yoo-jung, 35, and Kim Gyeo-ul, 26.

“I started the business in order to sell a certain atmosphere,” Kim Jin-seok said. “A lot of people today think that only successful people get to enjoy life, and I wanted to break that misconception down.”

The Premium Weather food trucks not only sell food and drinks, but also organize a variety of cultural activities such as mini-concerts and art fairs. Kim arranged about 20 concerts in 2015, mostly featuring young, unknown artists.

Kim endured a lot of hardship during the initial stages of the business. For the first time in his life, he was planning concerts and installing stage sets. He also had to spend most of the profits he made in order to arrange these mini-concerts. Despite such difficulties, however, Kim is enjoying the work.

“Young artists who maybe didn’t have the opportunity to show their talents now have the chance to do that,” Kim said. “And when that happens, those are the times when I feel most proud.”

Kim originally wanted to become a doctor of traditional medicine to fulfill his parents’ wishes. While studying to retake the Korean university entrance exam, however, he became doubtful as to whether that was what he truly wanted.

After serious contemplation, Kim said he realized that he wanted to live an analogue-style life, one in which he could take time to enjoy life’s smaller pleasures.

After being discharged from military conscription, Kim bought a used truck with the 8 million won ($6,800) he had in savings and decorated the interior himself. He installed speakers, bought some old-pop CDs and LPs, and soon, he had a hip cocktail bar on wheels.

“I want to make the kind of guerilla performances that are common in Hongdae [western Seoul] and Daehangno [central Seoul] available in other cities as well,” Kim said. “The food trucks will become mobile concert halls. With these food trucks, I want to deliver my idea of happiness to the people.”