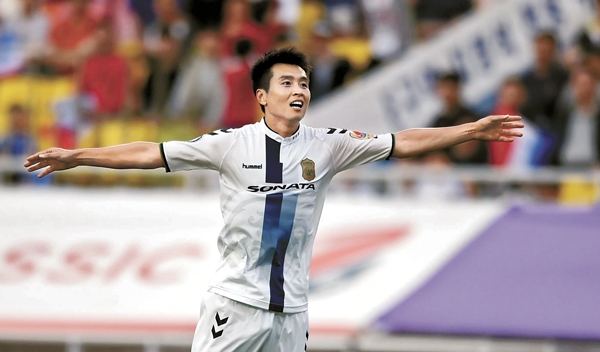 Jeonbuk Hyundai Motors striker Lee Dong-gook celebrates his goal in the 88th minute on Sunday during his team’s 3-2 win over the Suwon Samsung Bluewings in a K-League match. Sunday’s goal is Lee’s 185th of his career. [NEWSIS]

Jeonbuk Hyundai Motors ace striker Lee Dong-gook is arguably one of the most celebrated stars in the K-League Classic today. However, despite his many career highs and numerous records, the 37-year-old ‘old man’ of the team hasn’t let his success go to his head.

In the K-League Classic eighth round match against Suwon FC on April 30, Lee scored the opener for Jeonbuk in 28th minute from a spot kick. Giving his side the momentum, Jeonbuk piled in two more goals in the next 6 minutes, in the 30th and 34th minute, to grab the early lead and eventually edge Suwon 3-1.

Lee’s goal on April 30 was his fourth goal of the season as well as a record-setting offensive point, making him the first player in the K-League to reach 250 offensive points, the total number of goals and assists. His record is unrivaled, 70 points ahead of the second ranked Dejan Damjanovic of FC Seoul with 180 points.

Lee went on to add another point on Sunday during Jeonbuk’s 3-2 victory over Suwon Samsung Bluewings FC after scoring Jeonbuk’s third goal of the game in the 88th minute. After the goal on Sunday, he now has 185 points in goals alone.

“At this point, I am more eager to help Jeonbuk set new records rather than my own,” said Lee.

“It’s been seven years since I joined Jeonbuk and things are just getting better by each year,” he added. “The reason behind my record is because of my teammates and their help.”

After dominating the K-League, Lee tried his luck at the English Premier League in 2006 and struck a 18-month deal with Middlesbrough, who was in the top division then before it was relegated in 2009. He played 23 games in two years but was unable to score any goals. After his bitter failure in England, Lee came back to his homeland in 2008 and joined Seongnam Ilhwa Chunma, the predecessor of today’s Seongnam FC.

The first year after his return was unremarkable as he made only 13 appearances and scored only two goals and dishing out two assists. But he recovered from the ashes the following season when he put on Jeonbuk’s uniform. Playing in 32 games, 22 of his shots found the back of the net, signaling the return of the “Lion King.”

Since then, Lee’s scoring record has been in the double digits every year. Some would even go as far as saying that Lee is in his second prime. Some of the notable accolades on his shelf include four K-League MVP awards, the most anyone has ever won the top player title. At this point, he is essentially overturning all K-League records in offense.

Although an undoubted “record breaker”, Lee doesn’t make too much out of his triumphs. “At my age, I am no longer at the point where I should care about records,” he said.

“I am one of the oldest veterans of the game now and my teammates help the old man out a lot. I have the advantage as the striker and fellow Jeonbuk players create the most opportune chances for me to score goals. As the season goes by, old players remain and new players with excellent football skills join the team and I am the beneficiary of all that.”

What makes Lee happier than setting records is that, despite his 37 years, he is still holding his position on the pitch. “I am just content that I can still play in the game. I will play this game with the mindset that I contribute to the team’s success each time I tally an offensive point,” he said.

Lee now has a new objective ahead of him - joining the 70-70 club, 70 goals and 70 points in a single season, for the first time in the K-League history. Nevertheless, he says, “I am not too concerned about my personal records now. I’m more eager to contribute in writing new history for my team.”