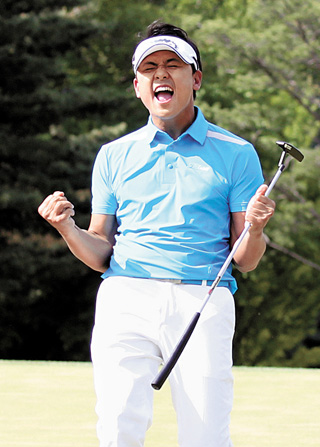 Korean golfer Park Sang-hyun celebrates his win in the 35th GS Caltax Maekyung Open after outpacing Lee Soo-min during the playoff on Sunday. This was Park’s first win in one year and seventh months. [NEWSIS]

The tournament - the second event in the Korean Tour this year sanctioned by the Korea Professional Golfer’s Association (KPGA) - was a tight match with the leader being swapped after each hole during the final moments of the fourth round.

Lee Soo-min, the winner of the European Tour Shenzhen International on April 16, who finished the third round from the previous day as the leader, maintained the top position on the leaderboard until the 15th hole on Sunday, after which everything went haywire.

At first, it was Lee Chang-woo, who remained tied at third after the third round, that challenged Lee Soo-min’s top position by overthrowing him after the 16th hole by one stroke. Lee Chang-woo was determined to catch up from the get-go, grabbing an early birdie in the first hole.

His struggle to turn the game around continued to create some of the most outstanding shots of the day on Sunday, including the bunker shot on the sixth hole.

However, the European Tour winning Lee Soo-min wasn’t going to let his old buddy get away with a victory. In the par-3 17th hole, Lee Soo-min nailed a brilliant putt just outside the green to tie at first and force the outcome of the match to be decided at the 18th. Lee Chang-woo struggled to put the ball in the hole when an on-par putting attempt was deflected off the hole. While Lee Soo-min carded a birdie, Lee Chang-woo had to settle with a bogey.

The contrast between the play of the two Lee’s on the 17th hole seemed to be the game-changer as Lee Soo-min regained the top position while Lee Chang-woo had to step down to the second place.

But as baseball legend Yogi Berra said, it really wasn’t over until it was over.

In the midst of all the rough-and-tumble, Park Sang-hyun, who tied the first round at first and finished the second round at second, maintained his composure throughout the fourth round to finish the tournament at 8-under 280. Park had no idea that his final putt for par in the 18th hole would force the entire tournament into a playoff.

The final hole of the tournament was more dramatic than previous holes and saw the result of the game undergo a dramatic change.

All Lee Soo-min had to do was to par the hole to grab the win. However, he roughed his tee shot for the par-4 18th hole to the right and missed the fairway. Attempting to grab par for the hole, Lee Soo-min chipped the ball between the trees to land on the fairway. Lee Soo-min’s third shot landed on the green, increasing his chance of winning the competition. But as his on-par putting attempt went left, the tournament went into a playoff.

Lee Chang-woo, on the other hand, landed his tee shot on the fairway but his vision was blocked by the trees, against which his second shot was deflected for him to miss the chance to birdie the hole. Lee’s third iron shot landed on the green but his par putt came up short and his chance to top the tournament slipped out of hands after he grabbed a bogey for the hole.

The playoff between Park and Lee Soo-min was nerve wrecking, going for two rounds.

The playoff rounds were played at the par-4 18th hole. The 18th hole proved to be a daunting course for Lee Soo-min, who almost roughed his second shot. His third shot landed on the green but a little far from the hole, whereas Park’s third shot, already on the green, found itself only a few inches away from the hole.

As Lee Soo-min bogeyed the second round of the playoff after the ball was deflected off the hole while Park nailed his fourth shot, Park screamed with joy as he added the fifth trophy from his professional career to his shelf at the GS Caltax Maekyung Open.