At 48, Urban’s still pushing the limits

At 48, Urban’s still pushing the limits 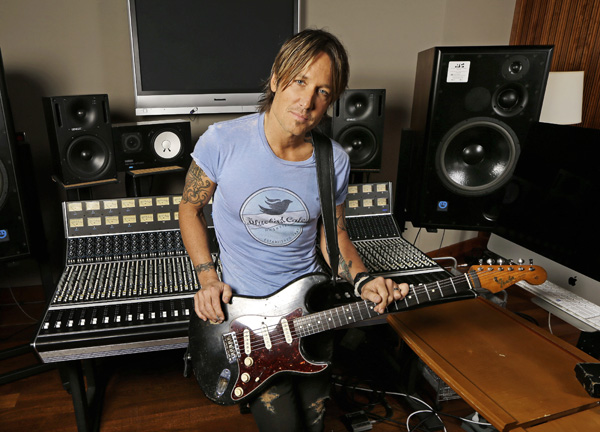 NASHVILLE, Tennessee - Keith Urban was on a cross-country flight last year trying to finish a new song about living in the moment and not holding onto regrets. But he was also thinking about two men close to him that had recently passed away.

“I was thinking about my dad who had passed away the month before and Nic’s dad had died 12 months before,” Urban said, referring to his wife, actress Nicole Kidman. “All these people, where do they go? Forgetting all those spiritual beliefs, they were here and then they are gone.”

Each time Urban previewed “Gone Tomorrow” to family or friends, each listener seemed to hear a different sound in the synthesizer-heavy track that features a six-string banjo, thumping drums and mystical EDM lyrics about dreams and light. One person thought it was bluegrass, another heard Middle Eastern influences, he said.

“I wouldn’t know how to describe stylistically what the song is because it encompasses so many things,” Urban said. “The fusion of all the various things, from melody to lyric to instrumentation to production to arrangement to the mix, every single aspect felt like I was planting a new flag for me. It was such that any song could go after it.”

For over 15 years, Urban, 48, has been a broad musical thinker, but he balanced that with his songwriting.

“For me, the songs you can take the most liberty on with production are the ones with pretty centric lyrics,” he said. “Not too obtuse, not too abstract. If the lyric is earthly in its imagery, rural, you can even take more sonic liberties with it.”

The album’s 13 songs are only a part of what Urban created in an 18-month time period. He recorded several more songs and spent a week working with producer Rick Rubin on music that ultimately didn’t make the finished record.

It was Urban’s idea to team up with Rodgers, the legendary Chic guitarist who has worked with Daft Punk, Pharrell Williams, Madonna and David Bowie. Urban thought Rodgers’ rhythm guitar playing was a natural fit for his style of banjo playing, but Urban said he had to prove it to Rodgers.

“He had that expression like I knew he would when I walked into the studio with a six-string banjo, like, ‘Are you kidding? What did you bring that thing for?”’ Urban said.

Urban and Rodgers spent hours putting together riffs and chords for the funky, groovy dance song “Sun Don’t Let Me Down,” but Urban felt it was still missing something. He asked Pitbull to write a rap verse for the song.

Producer-songwriter Busbee, who co-produced “Sun Don’t Let Me Down,” said Urban has clarity about how to fit together diverse artists and music.

“It was just the right usage of everybody and it has cohesiveness as Keith’s sound, Nile’s sound and Pitbull’s sound, yet it’s commercially viable across multiple genres,” Busbee said.

Urban’s first two singles have been embraced by country radio. He’ll get to unveil the rest of the album on a tour, that starts June 2.

Urban says it’s all about balance.

“You need the people who are constantly on the front lines, the pioneers pushing the boundaries, because it keeps the music relevant,” he said. “But you need the purists as well. That’s how the whole thing maintains equilibrium.”