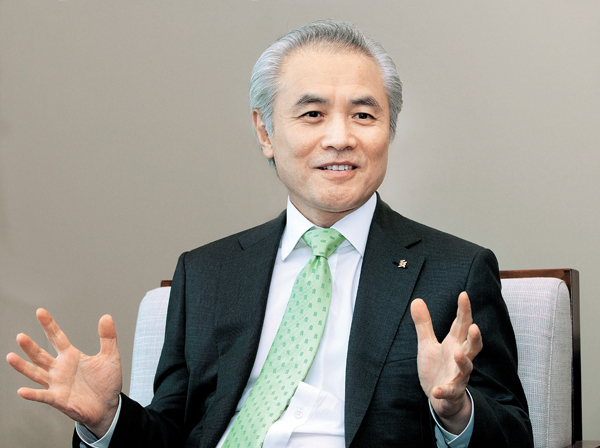 Ever since Korea First Bank was acquired by London-based Standard Chartered in 2005, the bank’s top spot was always filled by non-Koreans. In 2015, Park was the first Korean to take the helm of the bank.

Park, who joined Korea First Bank in 1979, is a professional banker in the retail finance business. He specialized in private banking, sales and retail finance strategy.

Standard Chartered’s choice of Park as CEO of its Korea branch is seen as a strong determination by the bank to enhance its retail business that has lost competitiveness in the Korean market.

On April 28, the bank held a ceremony to mark adding “Cheil,” meaning “the first” or “the best” in Korean, to its English name.

In the Korean market only, the bank prefers to be called “SC Cheil Bank.” The bank was known as SC Cheil Bank until 2011, but removed the Korean word for the past five years.

It is also the first time that the London headquarters approved adoption of an acquired local bank among its worldwide branches.

Last month, Park made another “first.” His bank launched “SC Cheil Bank Samsung Card” in partnership with the leading credit card company in the local market. It is considered an unprecedented partnership between a bank and another financial sector.

In the past, it wasn’t easy for the two sectors to cooperate because card companies and banks were in competition in the card market. But in a rapidly changing financial market, including falling commission fees, the partnership has created a win-win effect. Samsung Card has secured a stable channel to attract customers, while SC Cheil Bank is able to tap into the card firm’s big data to provide different financial services.

The bank also joined hands with Shinsegae, one of the leading retailer groups in Korea, and established the “Bank Shop” banking kiosks in Shinsegae Department Store and E-Mart branches across the nation. It is again the first bank to do so. Only two or three bank staff members work at the Bank Shop and offer banking services, except for money withdrawal, for customers using iPads.

The Korea JoongAng Daily sat down with Park, the industry’s “Mr. First,” last week to delve into what he believes is really going on in the local banking industry.

“Everything needs to be changed,” Park said. “Otherwise, we won’t be able to survive after 10 years from now.”

Survival may be impossible without pre-emptive action against the new streams, including super-low interest rates and digitalization in a reshaped financial world after the 2008 U.S.-triggered global financial crisis, Park said.

As for the bank’s two years in the red, Park confidently said, “We have obvious expectations for a surplus this year, since we have long been preparing for the future pre-emptively.” 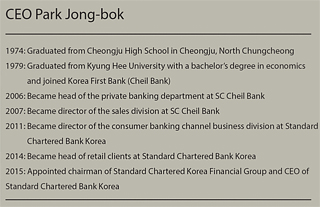 Q. Was it necessary to include “Cheil” in the bank’s name again?

A. “Cheil” from the former Korea First Bank carries significance in the history of the Korean financial industry. Until 20 years ago, the Korea First Bank was the No. 1 corporation in terms of paid corporate income taxes, beating Samsung, Hyundai and Posco. Not only the businesses but also financial companies like us made significant contributions to Korea’s economic development, and that shouldn’t be underestimated. In doing corporate finance, it is more advantageous to use the SC (Standard Chartered) brand solely, since the brand is incomparable with any other brands in the international market and has the highest credit rating level. With the SC brand, we can help Korean businesses in a lot of areas. On the other hand, SC is less known to consumers in the retail financial market. To uphold the historical significance and enhance the retail business, we decided to put “Cheil” back.

Some critics say SC neglected the retail business in Korea. What is your opinion on that?

I acknowledge that SC has been caring less about the retail sector for the past 10 years. We weren’t good at localization. In retail finance, we need to consider the culture, customs and history of the country in which we are operating, since the business exists for the general public. Usually, foreign-based banks have strengths in corporate finance. As a foreign brand, competing with local banks for the retail market is not only meaningless but also unrealistic. We need to find areas we can differentiate in the retail market to offer different benefits and services.

What is the story behind the unprecedented partnership with Samsung Card and Shinsegae?

Korea’s major industries - shipbuilding, shipping, steelmaking, retail and finance - are facing stalled growth. Some industries that used to fuel the Korean economy have now disappeared, or some have survived through differentiation. Inter-industry partnership is crucial in differentiating. Such partnership can create a synergy effect without making additional investments. We are the first in the financial industry to join hands with a retailer and a card company. The collaboration not only supports our growth but also improves our reputation and marketing activities. I can confidently say it was a great achievement. Our employees have outstanding sales and execution capabilities. Consumers showed great response to the Samsung Card partnership, and new card issuances are beyond our expectations.

What do you mean by differentiation in a more specific manner?

The financial world is going from analog to digital, from face-to-face to remote presentation, from traditional finance to fintech. More than 90 percent of transactions that used to take place at branches are now being processed at places other than bank branches. Even now, many people visit a physical bank branch twice a year, more or less. But they consider the image of a branch when they think about banks. We are in this transition time that is likely to persist for about 10 years. We should prepare ahead for the change. We can’t suddenly scale back the branch number from 1,000 to 500 or 100 by that time.

As part of the differentiation strategy, SC made swift moves to reduce its size. While cutting back on the number of branches, we are finding new contact points with customers. Physical branches may have been the single contact point in the past. Now, it is important to secure contact points as various as possible. SC has come up with an omni-channel with the iPad tablet. All banking services are available on the iPad with no need for a piece of paper, cables or electricity. Currently, it is the only bank that has evolved from the past’s analog, brick-and-mortar bank. The reason why we set up Bank Shops in Shinsegae Department Store and E-Mart is to capture diversified contact points, too.

It sounds contradictory that SC Korea would like to strengthen retail finances, which require human resources, while downsizing by reducing offline branches.

SC’s moves to reduce brick-and-mortar branches and human resources by accepting voluntary retirements are oftentimes regarded with negative views. However, I think differently. We did that to prepare for the future. Globally, the golden age the banking industry enjoyed for the past five decades is now over. High return of equity, fee income and high net profit were possible in the good old times, when the banks were allowed to capitalize themselves using various financial engineering techniques.

However, after these initiatives resulted in the subprime mortgage crisis in 2007 and the bankruptcy of Lehman Brothers the following year, financial regulations were strengthened globally, and the banks faced a totally different business environment. International regulations on capitalization and leveraging got stricter, and we have faced an era of super-low interest rates. The range of methods that helped banks make money got a lot narrower.

Banks, also, are corporations. They can’t expect a bright future without taking pre-emptive preparations. The Korean banking industry remains inefficient in terms of labor costs, largely due to a stiff labor market with high salaries and a seniority-based salary system. Korea also shows the highest number of offline branches per unit among major economies. The banks were capable of sustaining the branches in the past, but they aren’t anymore due to declining profitability. They should find ways to boost efficiency in operation. Instead of putting the burden on employees via benefit or salary cuts, the management needs to find sustainable solutions for how to share the burden together, by having constructive conversations with employees. Shrinkage of jobs is an inevitable trend.

At SC, the baby boomers chose to retire for their juniors. We were able to give quite a high volume of retirement severance pay, thanks to the group [SC headquarters] which supported us to execute 500 billion won ($427 million). It wasn’t an easy decision, but I’m sure such a difficult decision will turn into a competitive edge in the next five to 10 years if the overall banking industry faces an even tougher business environment.

Will there be additional restructuring?

No, because we can’t anymore. As we’ve downsized already, we are now tight in the number of offline branches and employees. SC now plans to boost per-employee productivity to the global level. In fact, Korean banks show an average return of equity of between 2 to 4 percent, lower than the global average.

As a banker with a strong sales background, what aspects do you emphasize the most to junior bankers?

I would say the three S’s are the most significant motto for bankers: new spirit, new style and new stream. I think banks nowadays have to differentiate themselves from each other by changing the manner of working with new spirit and morals to better adjust to the quickly changing business environment. HSBC and Citibank are both great institutions, but they tend to be scaling down their Korean operation. SC is the only foreign bank that can do both retail and corporate banking well. As we’ve already differentiated our position, I’m sure SC will be the only “hybrid bank” in the local banking industry [that does both retail and corporate banking well with strong omni-channel contact with our clients].

What do you think the “new banks” will look like in the future?

SC Cheil Bank currently has about 250 brick-and-mortar branches nationwide. But the number may decline down to 100 after a decade, because not only young people but also the older generations in their 40s and 50s here in Korea are very mobile-savvy.

Against the backdrop, the future banks will come up with a retail business model with flexible contact points to let clients easily access banking services wherever they are via mobile devices. But at the same time, the banks should position themselves differently from the Internet banks, which only can be strong in retail banking by its nature.

The conventional banks will keep working on corporate banking in the future and keep a certain number of offline branches where high-asset owners need to meet private bankers. While many conventional banks are trying to evolve into a business model of Internet banks, I think we’re standing somewhere at the middle in the process.