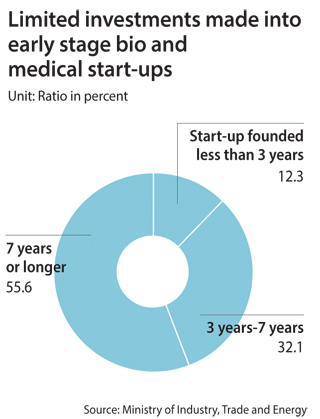 A 10 billion won fund is to be set up by the government to help new bio and medical start-ups that are having trouble finding financing.

The Ministry of Trade, Industry and Energy on Sunday said it will invest 10 billion won to aid these start-ups in a bid to attract the private sector to contribute 20 billion won or more.

Once the fund is created, a certain portion will be invested in bio and medical start-ups that have only been in businesses for three years or less. The government hasn’t decided on the ratio yet.

The management team in charge of running the fund will be chosen today.

“Until now, venture capital investments have been focused only on companies where they can recover their investments quickly and this makes it difficult for those that are just starting out to receive some of the investments,” said a ministry official.

According to the ministry, last year a total of 2.09 trillion won of investments were made in start-ups. Overall, start-up investments companies with less than three years experience received 647.2 trillion won, about 31.1 percent of the total investments.

The bio and medical start-ups during the same period received total investments of 313.7 billion won, of which only 38.5 trillion won or 12.3 percent was allocated to companies that have only been in business less than three years.

In both cases the largest portion of investments went to companies with experience of more than seven years. However, still in the case of bio and medical start-ups, that figure was much larger for those with more experience compared to the overall investments made to start-ups.

The ministry said it has designed the fund so that more private investors could participate, by decreasing the mandatory ratio of investment required in bio and medical start-ups with less experience.