There has been much debate since the April 13 general election about whether or not Samsung will launch a new holding company for its financial affiliates centered around Samsung Life Insurance.

According to industry insiders, the meetings were all requested by Samsung.

Over the last two years, Samsung has been reorganizing all its businesses, including selling off affiliates like its chemical unit and defense contractor.

But the first sign that the conglomerate was reorganizing its financial affiliates and governance structure came in May 2014, when Samsung Asset Management and Samsung Futures each became wholly owned affiliates of Samsung Life Insurance and Samsung Securities.

Samsung completed the restructuring of its nonfinancial units when it finally merged Cheil Industries with Samsun C&T on Sept. 1 of last year. It was around that time that Lee began meeting with the CEOs of financial companies.

The launching of the new holding company is believed to be the final stage of stabilizing the group’s governance structure, paving the way for Lee’s succession.

But the outcome of the general election, in which the opposition parties won more seats than the ruling party, has increased speculation about how - and when - the new holding company could be created.

In fact, the Minjoo Party is already pushing an insurance industry reform bill, known as the Samsung Life Insurance law, which would further tighten the regulations that prevents insurance companies from owning large amounts of stocks in affiliates.

As a result, Samsung may rush to create the holding company before the 20th National Assembly begins on May 30th and pressure intensifies. However, it could also opt to hold off until a more favorable legislature is in place. 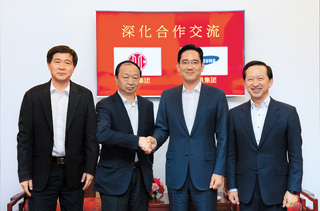 The holding company would consolidate Lee’s power by cutting the connection between Samsung Life, which has been the money supplier for the group, and Samsung’s nonfinancial investments like Samsung C&T which would end cross shareholding.

Cross shareholding is the method of corporate governance, most commonly practiced by Korean conglomerates, that allows the founding family to control companies despite owning relatively few of their shares.

The connection between the two is considered an obstacle to Lee’s control because cross shareholding is subject to various regulations under current law. One of such limits states that while a previous governance structure of cross shareholdings are allowed, new investments made to affiliates is banned.

The launch of the holding company could also contribute to improvements in Samsung’s profit structure.

Excluding the earnings made by Samsung Electronics, those made by its financial affiliates make up 70 percent of Samsung Group’s net profit.

In particular, the popularity of mobile payment system Samsung Pay has created synergy with Samsung Electronics and has risen as one of the group’s key businesses.

“We’ve been preparing to restructure our corporate governance regardless of the general election last month,” said a Samsung Group official. “But because of the election results, pressure from the opposition parties is expected to increase.”

Even if Samsung creates a holding company, it would likely have to sell off affiliates whose prospects are weak.

There have been rumors that Samsung is considering selling Samsung Card and Samsung Securities, both of which suffer from low profits and disappointing performances compared to other affiliates. Neither are leaders in their respective markets and both have little possibility of additional growth.

The financial industry estimates that Samsung Securities will be offered at 2 trillion won ($1.7 billion), but there are few buyers in Korea who could afford to pay that right now.

As a result, the one possible candidate is China’s Anbang Insurance, whose total assets exceed 121 trillion won and has recently been buying up Korean financial companies.

The fact that Lee and Samsung Life Insurance CEO Kim Chang-soo had an undisclosed meeting with Anbang Insurance Chairman Wu Xiaohui on Nov. 30 added strength to the rumors that both Samsung Securities and Samsung Card could be sold off.

However Samsung Card has officially denied such rumors through regulatory filing made in November and in January.

One high-ranking official at a brokerage firm who requested anonymity said that despite Samsung’s official denial of the rumor, his understanding is that Samsung is already discussing what will happen after it sells Samsung Card.

“The interest of the financial market is not whether or not Samsung Card will be sold but rather who the buyer will be and what it will go for,” the official said. “The possibility of selling the card company to Anbang Insurance is low since it will be burdened by the [unfavorable] public sentiments over Samsung selling a Korean company to a Chinese company.” 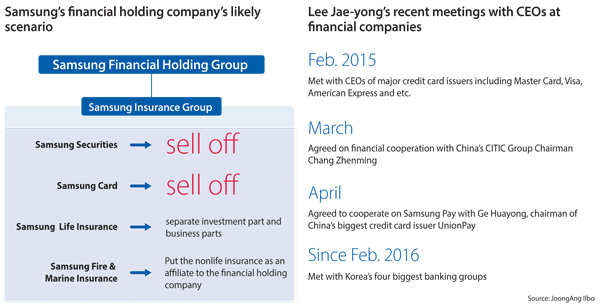 Samsung Card and Samsung Securities have both consistently denied rumors that they will be put up for sale.

If the conglomerate decides to create a financial holding company, what would it look like?

The likeliest scenario according to industry insiders is that Samsung Life Insurance will be converted into a holding company in which the main focus will be managing affiliates, while the department in charge of its actual insurance business will be spun off into a separate affiliate.

That new affiliate, along with Samsung Fire and Marine Insurance, will be placed directly under the holding company.

To become a holding company, the insurer would buy a controlling stake in Samsung Fire and Marine Insurance with the funds created by the sale of both Samsung Card and Samsung Securities

There is also speculation that Samsung might purchase Woori Bank. The Korean government has been trying to recollect the public funds it injected in the bank by selling shares while the bank is hoping to privatize once the sell-off is completed.

The longer the company stays on the market the more its value will fall, but the lack of viable buyers thus far have had the Korean financial authority to consider selling the bank’s shares to Chinese investors or private equity funds.

The biggest shareholder of Woori Bank is the Korea Deposit Insurance Corporation at 51 percent, followed by the Korea National Pension Fund, which lowered its stake in the bank from 7 percent to 4.9 percent.

Samsung just needs to secure a 30 percent stake to gain control of the bank. Woori CEO Lee Kwang-koo, whose term ends in December this year, has been trying to privatize the bank.

“Samsung for the past two decades has been trying to own a bank while the government wanted a well-financed company to own Woori,” said a high ranking official at a commercial bank who requested anonymity. “The financial industry sees Samsung as the only solution where the bank doesn’t have to be sold to foreign investors and yet will still be well-compensated.”